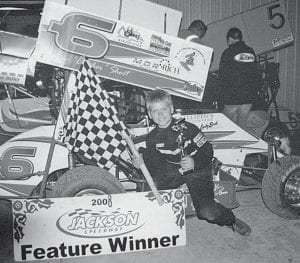 •250cc Unrestricted: Tyler Herschberger, 13, Pettisville, qualified fifth; fourth in the heat race; DNF Feature with broken throttle cable; Tyler went out for two practice sessions with 600cc car, and the car broke both times; his father, Lavon, reported it was the first time they had broken both cars in one night.