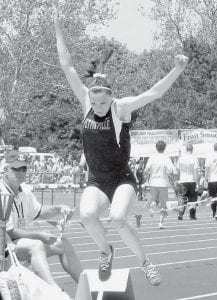 Haley Nofziger, a Pettisville junior, placed second in her first appearance at the Division III state track and field meet.

The meet was conducted Friday, June 6 and Saturday, June 7 at the Ohio State University, Columbus.

Nofziger finished second in the long jump, leaping 17 feet, 3 and 1/2 inches. Winning the event was Nicole Honsaker, a senior from Mineral Ridge. She jumped 18-1.

“We were a little bummed at first because she had to jump into the wind. But she’s a pow- erful girl; I think it helped her.

“She led most of the competition; her first jump was 17-0 1/4. The girl that finally won (Honsaker) was on her secondto last jump.”

Wagner said Nofziger’s goal was to get on the medal stand.

“Obviously, she got a little better” than just getting on the stand, said the coach.

Nofziger set a school record at the state meet with her jump.

“Haley loves to compete; she’s used to being on that stage. She thinks it’s fun to compete; not everybody’s that way.

“The boys ran hard,” said Wagner. “The heat and humidity was a factor for everyone.

“There’s just so little room for error at state.”

With two sophomores and a junior on the relay returning, “I felt we gained so much experience to build on for next year” with the trip to Columbus.

In addition to advancing to state, the boys 4×800 team also shattered the old school record of 8:28 with their 8:12 run at the regional meet.

“Alex Frey (senior) was a big factor” in their success, said Wagner. “The leadership he showed; he’d take kids aside and give them encouragement.

“He was the first to practice and the last to leave.”