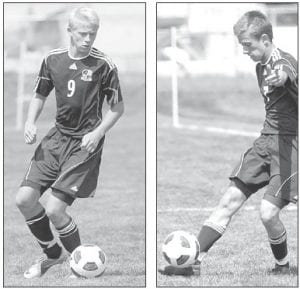 Brodie Nofziger, left, had a hat trick against Fort Jennings, giving him 16 goals on the season so far and breaking the AHS school record. The corner kick of Matthew Sevey, right, was headed in by Nofziger to give the Streaks a 3-2 victory. Both photos are from action earlier this season.– photos by Mary Huber

The Archbold boys soccer team stretched its unblemished record to six games with a 3-2 win over Fort Jennings and 2-1 over Ottoville last week.

The Streaks garnered their first Top 10 ranking in just the third season as a sanctioned varsity sport, rising to the upper tier of the 186 D-III boys soccer teams in Ohio.

Archbold and Ottawa Hills are the only state-ranked DIII teams from northwest Ohio, with the Green Bears in 12th place.

In the sixth minute, Brodie Nofziger knocked in a header from 5 yards with Shae Hernandez assisting from far on the left.

Eighteen minutes later Nofziger struck again, from 10 yards away in the middle after a David Bontrager pass from the right.

Twenty-two minutes after halftime, Ft. Jennings clawed back when Seth Ricker converted a penalty kick after an Archbold foul.

The Musketeers tied the game four minutes later on a midfield breakaway goal by Chad Recker.

With 12 minutes remaining, Nofziger clinched the game winner, heading in a corner kick from the left by Matt Sevey.

Nofziger’s hat trick gives him 16 goals on the season. That breaks the school record of 14 set by David Bontrager in 2011.

Archbold traveled to Putnam County, Thursday, Sept. 6, and took the lead in the eighth minute when Sevey sent a cross from the left to a waiting Nofziger, who chest trapped the crisp pass before firing the goal from 10 yards.

The teams traded shots throughout the half until the Big Green (4-2) was awarded a penalty kick with 5:27 remaining after an Archbold infraction.

Radabaugh successfully deflected the penalty kick as well as an immediate rebound shot before smothering the third attempt, garnering three saves in a matter of seconds and preserving the Streaks’ 1-0 lead.

Undaunted, Ottoville knotted the score just 13 seconds before halftime on a long throw in that Dylan Klima directed into the net.

Sean Stewart, AHS head coach, rallied the troops at halftime before Shae Hernandez scored what proved to be the winning goal less than two minutes after the break.

Defender Jacob Ott launched a long ball from midfield as Hernandez slashed in from the left for the header at 8 yards just before the Ottoville keeper could make the save.

The hosts out-shot the Streaks 13-9. Radabaugh had a season-high 12 saves while Big Green keeper Colin Bendele had seven.