Sell Bonds Against Revenues Instead 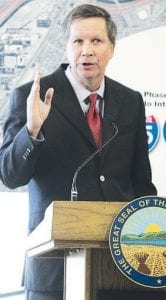 John Kasich, Ohio governor, announces his plan for the Ohio Turnpike at a Toledo press conference.– photo by David Pugh

The plan of John Kasich, Ohio governor (R), to raise cash from the Ohio Turnpike to do other road projects makes remarkably few changes to the current operation of the toll road.

He announced his plan Thursday morning, Dec. 13, in Toledo.

Instead, bonds will be sold against future turnpike revenues.

Kasich said there would be an initial offering of $1 billion in bonds, followed by a second offering of $500 million.

State officials say that $1.5 billion could be turned into $3 billion with local and federal matching funds. More than 90% of the money from bonds will be spent on projects in northern Ohio, which officials roughly defined as “north of U.S. 30.”

The Turnpike Commission still has about $500 million of its own bonds outstanding, but state officials said even with the issuance of new bonds, there will still be a debt-to-assets ratio that will satisfy the bond market.

Jerry Wray, director of the Ohio Department of Transportation, said with the plan in place, ODOT will be able to do 20 years of highway work in six years, creating about 65,000 jobs over that time span.

Rick Hodges, executive director of the OTC, said the bond money also will allow the commission to speed up the rebuilding of the toll road itself.

He said while turnpike workers do a great job of patching holes in the road, the roadbed itself needs to be rebuilt. Originally, the job was expected to take 40 years. The bond money will cut that time in half.

For those who use EZ Pass electronic transponders to automatically bill tolls to their accounts, Kasich said tolls for trips 30 miles or under will be frozen for 10 years.

For those entering the turnpike at the Archbold- Fayette interchange, Exit 25, tolls to the Ohio-Indiana line will be at the frozen rate.

To the east, a motorist can travel as far as the Toledo Express airport exit, a distance of 27.1 miles at the frozen rate. The Maumee exit, Exit 59, is 34 miles from Exit 25.

The Turnpike Commission pledges to keep all other toll increases at the rate of inflation for 10 years. Over the past 20 years, tolls have risen, on average, about 7% per year.

The benefit, state officials said, is that trucking companies and other users of the turnpike have a predictable future; they know what tolls will be, rather than being hit by unexpected, large increases.

Kasich said he expects the changes in the law to be included in the state’s upcoming transportation bill. The legislature will act on that bill in February.

However, he added he would prefer that the legislation was passed yesterday.

He said right now is the time to go to the bond market, while interest rates paid on bonds are low. Low bond rates reduce interest expenses for Ohio.

Earlier in the year, Kasich had talked about a lease, wherein a private operator would operate the road in return for a large upfront lease payment.

The State of Indiana leased its toll road to a private company in 2006. The state received a $3.8 billion upfront payment.

Ohio spent more than $3 million to hire a consulting firm to study the options for raising money out of the turnpike.

“A lease would have gotten more money, but we would lose control,” Kasich said.

Leaders, Kasich said, have to lead. They can’t hide behind polls or listen only to those who yell the loudest.

But, he said, the people’s concerns have to be listened to as well.

Leadership, he said, is balancing the two.

The sale of bonds, without altering most of the administrative structure of the turnpike, was the best compromise between doing nothing and leasing the toll road.