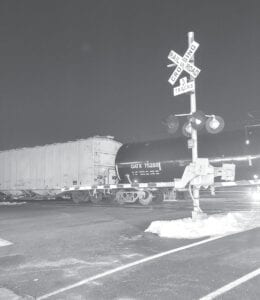 Archbold has had problems with trains stopping, blocking our two intown railroad crossings– sometimes for hours at a time.

It creates a vehicular traffic bottleneck, has the potential to slow emergency vehicle response times, and is a safety issue for pedestrians, particularly children, who sometimes resort to ducking under or climbing between railroad cars.

What are pedestrians supposed to do when they cross the tracks to enjoy a meal at a restaurant on the other side, or shop locally in a retail establishment, only to have no way to get back across when a train stops for who knows how long?

In the past, Archbold officials have turned to Robert Latta, our U.S. representative (R-Bowling Green), who makes time to call Norfolk Southern railroad executives. They promise to do better, and for a few weeks, even months, everything is great.

Then, as time goes on, train crews go back to stopping, blocking our crossings– an hour here, a couple of hours there. The police department writes citations, the railroad pays the fines, and doesn’t even notice.

Local officials get upset again, and again, they call Latta. The cycle repeats.

After the five-hour blockage Friday night, Feb. 19, and the seven-hour blockage on Saturday morning, Feb. 20, Latta called– but this time, they’re really going to fix it. Local officials have the name and phone number of a highly placed railroad official that they can call anytime, day or night. Railroad executives have a regional plan to avert crossing blockages. To quote Brad Grime, Archbold mayor, the response even feels different.

Well, excuse us if we don’t get excited. With variations on the theme, we’ve heard it before. NS makes promises; a few months later, our crossings are blocked again.

We’re happy Mr. Latta has come to our aide. We appreciate his time and effort, and we’re pleased that NS seems to be taking the issue seriously.

But we’ll reserve judgment for the time being. We’ll check back a few months from now, and see if our crossings have remained clear.

‘Things That Go’ Another Success!Golden Notes Of Archbold’s Memorable PastMust It Take Tragedy To Unite Us?