No Livestock Kissing For Right To Read Week 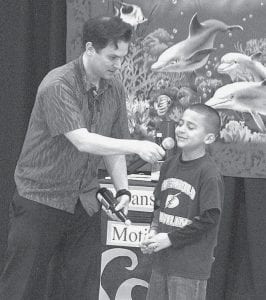 Elementary school principals have done some pretty whacky things over the years to encourage students to read, from eating worms to kissing pigs.

This year, Dorothy Lambert, Archbold Elementary School principal, won’t have to kiss any livestock. Instead, she will play in a volleyball game between the elementary school staff and the high school volleyball team.

The information was given to the Archbold Area School Board during its Monday night, Feb. 16, meeting.

It’s all part of the school’s Right to Read week, Feb. 23-27, which kicked off Thursday, Feb. 19 with an assembly, “Oceans in Motion,” presented by Eugene Clark, magician and puppeteer.

The event closes Thursday, March 5, with assemblies in the morning, a beach pizza party at lunch, and the volleyball game at 2 pm.

Lambert also told school board members the school had received $1,400 from the Box Tops for Education program, in which students and parents saved box tops from food containers and turned them in to the school. The manufacturer gives the school a grant based on the number of box tops.

She said the money will be used to purchase computer headphones, which the students will keep and use the following years.

The school also received a $1,250 grant from Bentley Systems, Inc. Bentley employees “sponsored” grants for individual teachers. Lambert told board members that some employees asked others to sponsor Archbold teachers.

The money will go for STEM- Science, Technology, Engineering, and Mathematics projects.

The team has four home and four away matches scheduled to prepared for the county quiz bowl, set for March 24 at AMS.

They were selected from hundreds of applicants from across the region.

The group performs Sunday, March 1, at the Stranahan Theatre in Toledo.