No Citations After June 19 Auto Crash 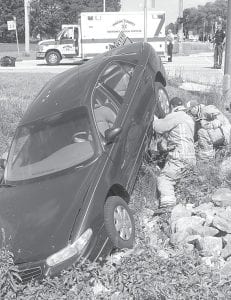 Archbold Rescue workers stop a small leak in the gas tank of a vehicle involved in a collision at the Burlington-Elmira intersection of US20A and St. Rt. 66, Wednesday, June 19. Both drivers said they had the green light at the intersection. Ohio State Highway Patrol troopers did not issue a citation.– photo by David Pugh

A version of this article was posted on www.ArchboldBuckeye.com at 12:45 pm, Friday, June 21.

Two persons were treated and released at the Fulton County Health Center following a two-car crash at the intersection of St. Rt. 66 and US20A in Burlington-Elmira about 4:10 pm, Wednesday, June 19.

The OSHP report states both drivers told troopers they had a green light. Both drove into the intersection, where they collided.

Parmar’s auto struck a road sign and came to rest nose-down in the ditch on the north side of the road.

Archbold and Wauseon rescue squads responded to the crash.

Archbold Rescue transported the Tilleys to FCHC. Parmar was treated at the scene by Wauseon Rescue, but was not transported.