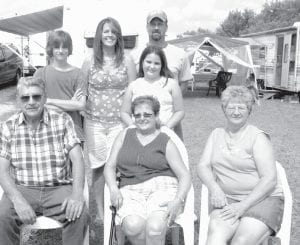 Richard and Nedra Fredrick and Joan and Boomer Rice, all of Fayette, have camped at the Fulton County Fair since the late 1970s. Today, residents of the Rice-Fredrick “camper compound” at the fair also include the Rices’ grandchildren and assorted members of the Fredrick clan, including their two adult children and grandchildren. Sitting, from left: Richard and Nedra Fredrick and Joan Rice. Standing are Rayce, Kristi and husband Kip, and Braelyn Humbert. Kristi is the Fredricks’ daughter.– courtesy photo

Although America’s real estate market has cooled considerably in the past few years, there’s land in this neck of the woods that couldn’t be hotter right now: the 600 camping spaces at the Fulton County Fair.

According to Dave Murry, the Fair Board director in charge of camping, spaces are so treasured that only five to 10 campers from each previous year fail to reserve “their” space inside the fairgrounds fence by sending in their camping fees on time.

“Half of them are devastated that they forgot to send their money in by the June 1 deadline,” said Murry.

“They may post-date a check June 1 and mail it, but then we get it with the postmaster’s mark of June 4 or 5. To be fair, I have no choice but to go by the June 1 postmark, even if they’re my best friend– but I hate it.”

Forfeited spots go to people who, beginning April 1, call to have their name placed on a waiting list. Each year, the list is started new on April 1.

In contrast to the 600 lots inside the fairgrounds fence, primitive campsites, which are by the woods at the southwest corner of the fairgrounds parking lot, are plentiful and lots are still available come Fair Week.

Primitive campsites have no electricity, although generators can be used as long as the noise doesn’t bother other campers.

Lots And Lots Of Lots

The first reference to camping at the fair didn’t appear in Fair Board minutes until 1964, although up until then it wasn’t unusual for exhibitors to stay overnight with their animals.

By 1974, the Board had established 58 camping lots, and discussion was underway about adding two more.

And all are worth their weight in gold to the people who return to them year after year.

“This land is ‘sacred’ to people who camp at the Fair every year,” he said.

“The Fair Board once received a letter from an attorney saying that so-andso got the former couple’s camping space in a divorce settlement.

“People are in tears if they miss the June 1 deadline. Some people save all year long to camp here. Most of them have been camping here 15 to 20 years.”

Joan and Boomer Rice and Nedra and Richard Fredrick, all of Fayette, have been camping at the fair even longer.

“Boomer and I started in 1978,” states Joan, “and Nedra and Richard started a year later.”

Back then, the couples, who lived just a half-mile apart when their kids were growing up, decided to camp together, and have been doing so ever since.

Today, residents of the Rice-Fredrick six-camper “compound” at the fair also include the Rices’ grandchildren and assorted members of the Fredrick clan, including Nedra and Richard’s two adult children, their spouses, and children.

“It takes us about four trips to get everything out here,” Joan laughs. “We have to pack the campers, the picnic tables, the firewood, and the grill.

“We do as much of the food as we can before we come. Then when we’re here we throw stuff on the grill, have potato salad, macaroni salad, brownies. And we always have chili the first night, because the guys are coming and going, watching the tractor pulls.”

“At first, we had all our meals back here,” Nedra said, “but then the kids said, ‘This isn’t right. We’ve come to the fair and we want some of that food.’

“So they’d eat breakfast here and knew we’d have a meal back here at 5 or 6, but if they wanted to spend their money on fair food, they could.”

“At night, all the kids would be at Fredrick-Rice campfire till 2 or 3 o’clock in the morning,” said Joan.

“Sometimes even later,” Nedra said, smiling at the memory.

Like the vast majority of fair campers, the Fredrick and Rice families prefer the creature comforts of campers over tents.

“Some people even bring refrigerators and set up cook stoves like they’re cooking for an army,” said Murry. “Tents are minimal; maybe just 10 to 15 a year.”

On a Sunday two weeks before each fair, Murry and a crew of volunteers stake out camping lots, meticulously measuring and labeling each one.

It takes five men working from 7 am to late afternoon to get the job done.

And this year, they had to do a lot more work before they could even get started.

“We renumbered spaces this year by gate, so we had to repaint all the stakes,” said Murry. “I had a whole snowmobile trailer full of them.

“When it gets into about Tuesday before the Fair, Jamie Buehrer, Paul Schultz, and I are there full-time, trying to make sure that we check paperwork before somebody unhooks their camper and drops it in the wrong spot.

“It takes all three of us to handle it.”

Murry and Buehrer have been staking lots since they were kids. Jamie’s father, Carl, has been on the Fair Board since 1972. Murry’s late mother, Marilyn, became a Fair Board member in 1984 and was the director in charge of camping.

When Chuck left the board a few years ago and Dave was elected to it, he picked up his father’s mantle.

“The fair gets in your blood, just crawls right in there,” Murry said, explaining why he devotes so much time, including vacations, to the fair.

“There are 15 of us on the Fair Board, and we all have that love for the fair.”

And he believes that the love of the Fulton County community for its fair accounts for the popularity of camping there.

“You can quote my wife Gwen on this,” he said. “She says that if you don’t grow up with the Fulton County Fair as a little kid, it’s not a big deal to you. But if you grew up with the fair, there’s just a love for it that no one can understand.”

Clearly, that love is alive and well in the Rice and Fredrick clans.

“We’ve never thought of not camping at the fair,” Nedra said. “The fair is ‘reunion’ time to see relatives, and friends, and neighbors. We would not give up camping here.”

Joan is more direct. “We’ll stop camping at the fair when we die.”