Nine Back For AHS Softball 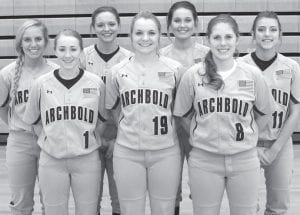 Nine letterwinners are back for Joe Frank, Archbold head softball coach, from a team that finished 25-5, 8-0 in the Northwest Ohio Athletic League last year.

It was the 10th straight year the Streaks won or shared the league title.

The Streaks made it all the way to the Division III regional finals before falling to Bloom Carroll, the eventual state runners-up.

Frank has spent 14 years as AHS softball coach, and has compiled a 315-80 record.

But the Streaks have inexperience at key positions, like second base and catcher.

“Our goal is to be playing our best softball of the year when tourney time rolls around,” said Frank. “Our non-league schedule will be very challenging as we prepare to defend the NWOAL title.

“It will take some time for us to adapt to the new roles that some of our players will be asked to fill.

“We hope to defend our NWOAL title and make a tourney run, and it will take all of our players pulling in the same direction for that to happen.”

In the NWOAL, “there will be some stiff competition as we try to defend the title,” said Frank.

“Bryan returns about eight starters and has few, if any, seniors. Patrick Henry has most of its starters returning, including an All-Ohio player who missed all of last season with a knee injury.

“Evergreen and Wauseon return some key players and will make some noise in the league, as well.

“We can’t afford to take anyone lightly, or we will pay the consequences for it.”