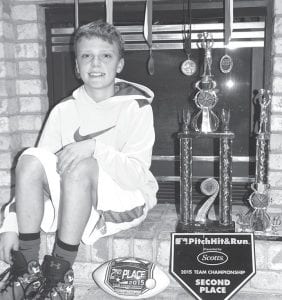 D.J. Newman, 12, Archbold, with some of the trophies and awards he received in sports competitions since the age of 9. This year, he is the co-champion free-throw shooter among Ohio 12-year-olds. His parents are Doug and Roxy.– photo by David Pugh

There were six boys in his 12-year-old age group. He drew a card to determine when he would shoot.

The fourth boy got six. The fifth made 18.

Then, on his 22nd, the ball went up, rolled around the rim… and stopped.

The ball balanced on the three-inch flat piece of metal that holds the rim away from the backboard… and just sat there.

“It just rolled around and stopped,” D.J.’s father Doug said.

D.J. said when the ball left his hands, he thought it would be good. But it just sat there.

That left the official conducting the competition in a bit of quandary. He decided to give D.J. a do-over.

“I was very pleased with how he was, mentally,” Doug said. “I think it’s hard to sit there and wait” while other boys shoot.

“Then, when the ball stopped, I thought, ‘he’s done, he’s going to miss his next three.’ He had gotten into a rhythm. That was totally broken, but he seemed pretty relaxed out there,” Doug said.

The decision to give him a do-over on the ball that balanced on the bracket put him in a shoot-off with the other shooter who made 24 shots.

Later, tournament officials decided that D.J.’s balanced on-the-bracket shot should have been counted as a miss.

But, rather than do the whole thing over, it was decided D.J. and the other boy would be co-champions in the 12-year-old age group.

D.J. is no stranger to state competition.

He’s been to the Punt, Pass & Kick state final in Cleveland five years in a row. He was second last year among boys ages 12 and 13.

He’s also been to state in the Pitch, Hit & Run baseball competition, where he was second in his age group.

He plans to continue to participate in sports as he grows older.

For now, when his friends choose teams for a sandlot game, “I usually get picked first,” he said.