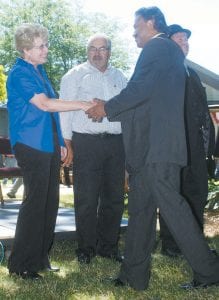 Einstein Francis, third from left, shakes hands with Debbie David, president and chief executive officer of Sauder Village, after Francis, a native of India and an Archbold resident, took the Oath of Allegiance as a new U.S. citizen, Friday, July 4, at the Village. Next to David is George Karagiore, speaker at the event. Karagiore is a naturalized citizen from Greece.– photo by David Pugh

Einstein Francis said when he first arrived in the United States, he felt overwhelmed by the kindness of the people of Archbold.

Francis and his wife, Nisha, were born as citizens of the country of India.

They have lived in Archbold for about 15 years.

Following the annual naturalization ceremony at Sauder Village on Friday, July 4, they are now citizens of the United States.

They joined 46 others from 29 countries who took the oath of citizenship during the July 4 ceremony.

Einstein said after finishing engineering school, he found it hard to find work in India. He took a job in the Middle Eastern city of Dubai, where he worked for six years.

But he found things in Dubai that concerned him.

The son of a Lutheran minister, Einstein said he didn’t feel there was much religious freedom in Dubai, and that foreigners were treated differently.

For example, work permits for foreigners are different colors for different nationalities and religions. 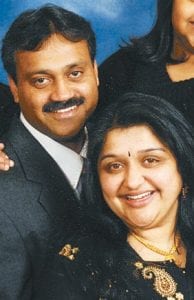 Some workers are allowed permits to purchase alcohol; others are not.

In coming to Dubai, foreign workers are given some financial assistance (about $2,000, he said), and help finding a place to live, but after that, they are on their own.

He began looking for work in the United States, United Kingdom, and Australia, and was hired by Bil-Jax.

It took six months to complete the paperwork to come to the U.S.

Bil-Jax took care of all of it.

When he got off the plane in Detroit, he was expecting to be met by someone who looked like Clint Eastwood.

Instead, there was his new boss, David Brinegar.

Einstein said Brinegar does not look like the popular movie actor.

There was more in store for Einstein than just a ride from the airport. He said Brinegar invited him to dine in his home.

Since Einstein didn’t have a car, Brinegar took him to the grocery store.

When he got his own place, people brought him furniture.

“It was overwhelming, the kindness of this place,” he said.

Nisha was born in the nation of Kuwait, but that country doesn’t grant citizenship to all who are born there.

Their marriage was an arranged marriage. They were married in May 2000.

During the time Einstein was here without her, she said her husband was “married, but (living like) a bachelor.

“Then I came, and everything changed!”

The couple attends church at St. James Lutheran Church in Burlington, where they feel a part of the church family.

Einstein said they wanted to raise the children as Christians.

At St. James, the children have “several grandmas and grandpas,” Nisha said.

“Church is one part of our family.”

Einstein’s hometown in Southern India has a population of about 50,000.

Dubai, part of the United Arab Emirates, has over 2 million people.

Archbold was a bit of a surprise for him.

“When you think about the U.S., you always dream of New York,” he said.

Nisha, who was raised in a small village, said movies show America as big cities.

Einstein and Nisha say they enjoy their life in Archbold.

“We’ve lived here this long, we feel like we’re part of the community.”

Einstein said one of the things they are looking forward to as U.S. citizens is voting in elections.