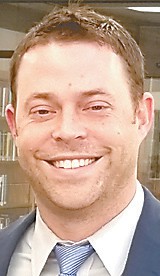 It was his fourth day on the job.

But, as a 2001 AHS graduate, he knows some of the people he’ll be working with.

“Yeah, I would say I know some of the people, but there have been a lot of new people come to the district. I’ve had an opportunity the last couple of days to meet with some people, as individuals and in groups, so I can start putting names to faces,” he said.

Selgo said he’s had the advantage of working with Marc Robinson, former interim superintendent, who has many years of experience in the position.

Robinson has been a valuable resource, Selgo said.

“He is extremely knowledgeable about the position, having served in it for years at a local district (Wauseon), and so he has an infinite amount of knowledge regarding the different day-to-day tasks,” Selgo said.

“I had the opportunity to work with Mr. Robinson for a couple of days, and then I think we had a day here before the students came back.”

Robinson will be available on an as-needed basis.

“I am very thankful for the opportunity to work with him,” Selgo said.

Having been on the job a few days, are there any particular challenges the district faces?

“I don’t know of any immediate challenges,” he said.

He did point to the Rover natural gas pipeline, which runs through the school district. The pipeline impacts district finances in both positive and negative ways.

“So we’re looking at that. I know that’s going to be one of the top priorities, finding out where that puts the district and our financial stability moving forward,” he said.

The actual impact of the pipeline isn’t fully known.

“You want to make sure that the information you’ve been given is accurate, and then you have a better opportunity to plan appropriately for the future.

“There’s a process of getting numbers and then verifying the numbers before we feel comfortable in terms of how that’s going to impact the future of Archbold Schools.”

Another issue that developed is problems with the HVAC– Heating, Ventilation, and Air Conditioning system– at the elementary school.

Selgo said he was not fully familiar with the problem. He will meet with Dean Beamont, Beamont Heating & Cooling, “and kind of get his take on it.”

“He’s been far more involved with it than probably Mr. Robinson has,” Selgo said.

He said he didn’t know how old the HVAC system is, “but as things age, sometimes they do need repairs, and there’s times that things need upgraded.

“I don’t think it’s a major problem…but certainly, if it is something we need to get on the agenda, we’ll begin to put together a plan and see where we’re at and what we need to do.

So far, Selgo said everyone he’s worked with has been “overwhelmingly welcoming, as I would expect for this community.”

Archbold “is a very welcoming community. Not a lot has changed in that sense since we lived here.

“It’s a very gracious community, and I’m looking forward to getting more involved,” he said.

Formerly the principal at Ottawa-Glandorf High School, Selgo and his family still live in the Ottawa area, with plans to relocate to Archbold.

So how’s the commute?

“It’s going good. It’s a little longer commute than I’ve had,” he said.

“It’s not undoable, and the golden nugget at the end is it’s only temporary. We’re going to get through it, and then we will hopefully get relocated here in the very near future.”