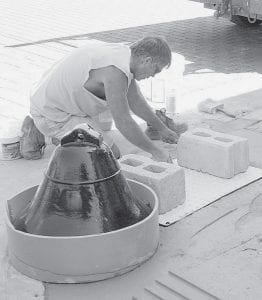 Robin “Smitty” Smith, an employee of Krueger Construction, finishes concrete work at the intersection of South Defiance and Stryker streets. The intersection was damaged when a semi truck pulled the bell-shaped bollard out of the ground and damaged the sidewalk and light post. Note the new bollard on the left side of the photo.- Buckeye photo

With apologies to The Angels, who recorded the 1963 hit, My Boyfriend’s Back, Archbold’s bollard is back, and you’d better not cut the corner.

Workers from Krueger Construction, Archbold, finished reinstalling the bollard Tuesday, Aug. 26. The first one was ripped from the ground by a semi truck, Monday, May 5.

Bob Seaman, Archbold village engineer, said steel reinforcing rods have been added to the bollard to help hold it in the ground should another semi pull it loose.

The bollard base has a large hole through the center. As the bollard is set in concrete, the hole is filled to create a stronger bond between the castiron bollard and the concrete foundation.

Rebars are placed through the hole and embedded in concrete, to make the base stronger.

Concrete alone wasn’t strong enough on May 5, when Elmi Obsieyeh, 51, Columbus, was driving east on Stryker Street. He attempted a turn on South Defiance Street and ripped out the bollard.

The semi trailer struck the nearby lighted bollard, the bell bollard, and the traffic signal pole on the southwest corner of the intersection. The truck ripped the 400-pound bollard out of the ground. The driver didn’t stop.

Archbold police officers tracked him down; Obsieyeh denied any knowledge of the mishap. He received citations for an improper turn, leaving the scene of an accident, and driving a vehicle that was too long.

The bell bollards are designed to protect the intersection from vehicles cutting the corner too short. The theory is, if truck wheels drive over the bollard, the shape of the bell will push it back into the intersection.

A large concrete block was placed at the intersection to protect the new bollard replacement while it cured. Tire marks on the block indicate a truck rubbed against it as well.