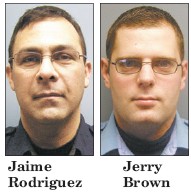 A version of this article was posted to ArchboldBuckeye.com at 9:43 a.m., Friday, July 5.

Archbold Village Council approved design and bidding documents for a Stryker Street sidewalk, and elevated an Archbold police officer from part-time to full-time at its Monday, July 1 meeting.

Council approved a measure authorizing the design and bidding for a five-feetwide concrete sidewalk along the north side of Stryker Street, west from DeGroff Avenue to Westfield Drive.

Once at Westfield Drive, the walk will turn north, and continue to the Westfield Medical Center offices.

No sidewalk exists along the route.

Also, Howell said he had been in touch with Phil Ennen, president and chief ex- ecutive officer of Community Hospitals & Wellness Centers Bryan, about the project.

He said Ennen agreed CHWC would maintain the sidewalk from Stryker Street to the medical center building. 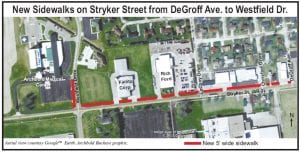 The engineer’s estimated cost for the construction of the sidewalk is $82,000.

Rodriguez has served more than 21 years with APD. He joined the force in March 1992.

He is retiring due to health concerns. He has been on medical leave since December 2012.

In connection with the action, council approved moving Jerry Brown, an officer, from part-time to full-time status.

Jeff Fryman, a councilman, former police officer, and head of the council police and fire committee, said Brown was the second-place candidate the last time the village interviewed for a fulltime officer position.

Brown has been a member of the APD auxiliary since October 2012.

Fryman said Brown has no other employment, and has been “filling in quite a few hours for us.”

The appointment was added to council’s agenda just prior to the meeting.

The change order increases the price of the project by $3,950.

“You have to expect that when you dig into a 30-yearold (water treatment) plant, you’re going to find stuff you did not anticipate,” Howell said.

He said there will be a small reduction in costs, as the specification for the roof for the new building being constructed to house the equipment for anion exchange has been changed.

Howell said the roof will be switched from standingseam metal to rubber.

“Standing-seam metal lasts 40 years, but it leaks,” he told council.

Also, he said the electri- cal grounding system for the water treatment plant is not up to current standards. It will be upgraded for safety reasons, he said.

Howell showed council a plaque presented to the village by the Ohio Water Environment Association.

It recognizes the village wastewater department for receiving the Facility Image award.

The award recognizes the department for its upkeep of the appearance of the village wastewater treatment plant.

Reading a letter from the organization, Howell said the plant “looks like anything but a wastewater treatment plant,” and blends in with its surroundings to become part of the neighborhood.

The plaque will be mounted in the plant break room.

Ed Leininger, councilman, asked Howell to prepare a letter to the employees on behalf of council, congratulating them on the award.

Jim Wyse, mayor, told council that for its Monday, Aug. 5 work session, he asked that discussion of a celebration for the village’s 150th anniversary, or sesquicentennial, be added to the agenda.

He said he had talked to leaders of other communities and asked if it was too soon to begin planning for the event, which occurs in 2016.

The answer, he said, was no.

He told council if the work session agenda becomes too long, the sesquicentennial discussion could be dropped.

He said he hoped to get village service clubs involved, along with the Chamber of Commerce and senior citizens.