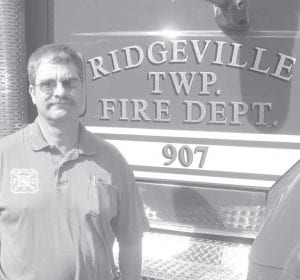 The new chief of the Ridgeville Township Fire Department is, in fact, an old hand on the department.

Ken Freytag, appointed to the post by the Ridgeville Township Trustees, Tuesday, Sept. 11, has been on the department for 27 years.

He was considered for the job in 2006, when Bob VonDeylen, then fire chief, became ill and resigned. He died that October.

At the time, the trustees selected Dexter Benecke, who had held the job before VonDeylen.

“I was perfectly fine with that,” Freytag said.

Freytag said for him, being a member of the fire department is community service.

His interest in community service “might go clear back to 4-H days. I was in 4-H for all the years you can be in,” he said.

“We would do community service projects, and it was always a gratifying feeling.”

Before joining the fire department, Freytag was part of a Henry County search and rescue team, prior to the group disbanding.

Freytag said he hasn’t had any specific training to be a fire chief.

“Just the school of hard knocks,” he said.

He has attended several seminars covering topics such as incident command and hazardous materials.

“People skills are one of the more important aspects of being a leader– knowing your personnel and what can be expected from them,” he said.

“Everybody has different talents and abilities. You have to be able to utilize them both at a (fire or rescue) scene and at the station.”

Freytag said the department has a good mix of skills among its 30 members.

“Your older members take on more of an advisory position,” he said. “They put on the SCBA (self-contained breathing apparatus, or smoke mask), and go in (to a fire). But they’ve got just as vital a role at the scene as any other job.

“You don’t ask people to go beyond what they feel comfortable doing. That’s when people get hurt.

“Of course, it’s not a bad idea to let people push that envelope of comfort, to prove to themselves, ‘hey, I can do this.’

“You challenge your personnel to do their best, and accept new roles and challenges.”

When asked if there was a lot of paperwork involved in the job, Freytag sweeps a hand over the stacks of papers and notebooks, and said, “Look at my desk!”

“I knew it (paperwork) existed. Probably the number one challenge is to find out what all there is, and then figure out who I can delegate some of that work to.”

In his years with the department, Freytag said he’s seen every fire truck or ambulance replaced once, sometimes two or three times.

“This is the third ambulance and the second brush truck,” he said.

He has been on the committee that has written the specifications for all but one of the current fleet of vehicles.

“At least I know how they’re put together,” he said.

As of Saturday, Sept. 15, Freytag said he has yet to take command at a fire or accident scene.

“Whoever gets there first, the first officer on the scene takes command. If they’re not asking for help, I’ll let them fly with it,” he said.

“So far, I haven’t announced that I’m in command.”