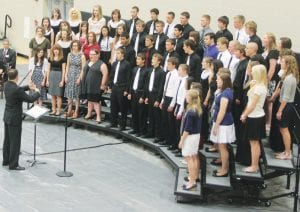 Activities, both formal and informal, were the order of the day for the Sunday, May 6 dedication ceremony and open house at the new Pettisville School building. Top: the PHS choir performs during the ceremony, held in the new gym. Bottom left: Rebecca Liechty, a fifth grader, demonstrates the use of a computer “smartboard” while teacher Tom Wagner looks on. Bottom right: Peter and Anna Rose Kiesow, rural Pettisville, look at a picture of their daughter, Amy (Kiesow) Austin, in her Class of 1980 portrait. Class portraits are on display in The Gallery, just off the school atrium.– photos by David Pugh

There’s an old axiom that goes something like this: Success has many fathers, but failure is an orphan.

That’s true of the successful completion of the new Pettisville School, which was officially dedicated Sunday, May 6.

During speeches by school, state, and construction offi- cials, many were recognized and honored for their roles in the project.

Pettisville is one of more than 90 school buildings in the state that have been built with partial funding from the Ohio School Facilities Commission. The agency was established to spend Ohio’s share of a large tobacco lawsuit settlement fund for the replacement of aging schools throughout the state. 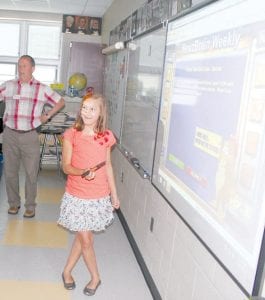 •Lynn Wachtmann, state representative, the first state official to pledge his support to changing the rule;

•Stephen Buehrer, then a state senator, who drafted the change in the funding formula;

•Bruce Goodwin, a former state representative who shepherded the change through the Ohio House of Representatives.

Together, they worked to insert 41 lines into the 80,000-line 2007 state budget that not only saved the State of Ohio $4 million, but also made a new school for Pettisville possible.

“A simple ‘no’ from Mike would have stopped everything,” Switzer said. 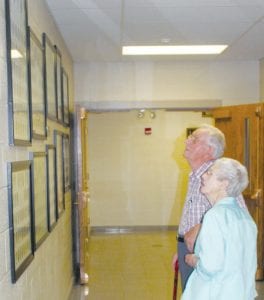 As he finished his speech, Switzer called Shoemaker to the podium and presented him with a plaque recognizing him as an honorary Pettisville Blackbird.

He said jokingly Shoemaker would be counted under open enrollment.

Shoemaker said Switzer was too modest.

He said Switzer traveled to Columbus often, pleading his case for OSFC funding only to have the door shut in his face several times.

But he kept trying.

Shoemaker told the story of when one of his sons was talking about attending an expensive, private university.

“I said, ‘Son, I haven’t got anything better to spend my money on.’”

New buildings like the Pettisville School say to children that Ohio has nothing more important to spend its money on than its youth.

John King, president of the Pettisville School Board, said since the Pettisville Local School District was created in 1929, the 34 men and two women who have served on the school board have held the same vision.

They resisted efforts throughout the years to consolidate or merge the district with others.

“They stood up to the prevailing view of the times. Pettisville will continue to exist,” King said.

Later, in 1992-94, there was another vision: this time of a new gymnasium, library, and classroom space.

In an unprecedented effort, nearly $2 million was raised to construct an addition to the school building, which is today the north part of the new school.

In 1997, the OSFC was created, and for the first time, the State of Ohio played a fi- nancial role in constructing school facilities, King said.

Only later, through the vision of Ohio legislature, was the law changed to allow the Pettisville School to be built.

Dan Bruner, a board member, talked about the construction of the 1929 Pettisville School.

“Within a year after the bond issue was passed, the nation was plunged into the deepest Depression ever, but the community paid off the bonds for the new central school facility,” he said.

Even with state funding, voters in the school district passed a 7.85-mill bond issue to fund the local match and to pay for some locally-funded portions of the school.

He said that thanks to a favorable bidding climate, and efforts to maximize resources, the project is $2 million under budget.

Loren Roth, another board member, discussed the committees that were formed to help plan the building, while Ed Bracken, president of the Pettisville Teachers Association, talked about the teachers’ involvement.

Dan Sauder, a member of the school board and the Pettisville School Foundation, talked about the school’s wind turbine, and one of the last pieces of the school to be completed, the atrium.

The wind turbine, due to be constructed this summer, will, depending on wind conditions, be capable of generating 150% of the school district’s electrical needs.

The atrium, he said, started out as a simple hallway connecting the two schools.

Now, with the support of more than 300 donors, the atrium provides a gathering place for students and concession sales during events.

It has several features tying the new building to the former 1929 building, including the stone school masthead, which was once above the front door of the original building.

Steve Cipparone, project manager for RRM Construction Managers, one of the many firms responsible for the new building, said when his team visited the old school building many years ago, “We noticed immediately the school was in immaculate shape, given its age.

“The building had character, and you could tell you were in Pettisville.”

“Fast forward to today, and here we are in this new building.

“But some things will never change. You can certainly still tell you’re in Pettisville.

“When you walk in this new building, there’s a feeling that this building belongs in this community.”– David Pugh

Preheat oven to 425 degrees. Place the frozen tilapia tenders on a baking sheet and bake according to the package instructions.

Add mayonnaise, dill, Dijon, lemon juice and water together in a small bowl. Stir well to incorporate. Place bowl in the refrigerator until ready to use.

Drizzle with 2 tablespoons of Dijon dill dressing and serve immediately.