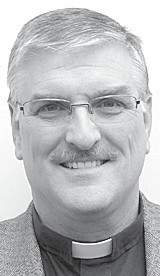 Carl Rockrohr, of Milwaukee, Wis., will be installed as pastor of Zion Lutheran Church, Ridgeville Corners, Monday, Feb. 18, at 3 pm.

He then attended Concordia University Wisconsin, where he received a bachelor’s degree in theological languages.

He received a Master of Divinity degree from Concordia Seminary in St. Louis, Mo., before being ordained as an LCMS pastor in 1990.

He completed Master of Sacred Theology and Doctor of Philosophy (Ph.D) degrees in systematic and doctrinal theology at the St. Louis seminary.

He has pastored three LCMS congregations, in Columbia, Mo., Parkston, S.D., and Milwaukee.

Carl is married to Deborah, a deaconess in the LCMS and teacher at Concordia Lutheran High School, Fort Wayne, Ind.

They have four children: Paul; James, a U.S. Marine Corps captain; Rebecca, an LCMS deaconess in Mondovi, Wis.; and Ted, who is continuing his professional training in Fort Wayne, Ind.

Carl, his wife, and three older children served with the LCMS Office Of International Mission in rural Ghana, West Africa, from 1992-98.

He also worked as a dean and as an assistant professor of religion at Concordia University, Ann Arbor, Mich.

He was an LCMS missionary and theological educator in South Africa and Ethiopia with Deborah and Ted from 2011-2014.