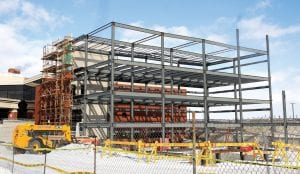 Above: The new four-story medical office building takes shape on the south side of the original Fulton County Health Center building. Recent bitter cold temperatures have delayed work on the project. Right: An artist’s conception of how the building will appear when completed in about 18 months to two years.– photo by David Pugh; graphic courtesy FCHC

Construction of a new $22 million, 62,000 square-foot medical office building on the Fulton County Health Center campus is on-time and on-budget.

Steve McCoy, director of marketing and planning for FCHC, said ground for the building, the second to be added to the FCHC campus, started in October 2017.

“The last few months, they’ve set up drainage and got the foundation built. Now they’re working on the stairwell and steel,” he said.

There have been no problems getting materials, he said. Some of the work has been delayed due to bitter cold temperatures over the last few weeks.

Before work on the building began, two parking lot projects were completed.

A new parking lot with 150 spaces was added adjacent to the south parking lot.

Additionally, a 12-space lot was added outside the Ambulatory Emergency Room entrance.

Ambulatory patients are those who can walk or otherwise transport themselves into the ER. 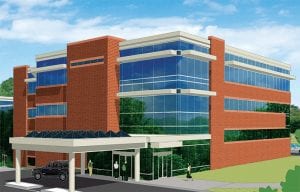 The lot will be available for those dropping off patients at the ER, or for surgery.

The building will be composed of four floors. Three will be used for medical offices. The fourth floor will be unfinished, available for future use.

McCoy said all of the office spaces on the first three floors have been filled, with tenants ready to move in once the building is complete.

He said plans call for the new building to be ready for occupancy within 18 to 24 months.

In a September 2016 article about the project, Patti Finn, FCHC chief executive officer, said the building would be marketed to medical specialists who may travel to Wauseon to hold office hours on a regular basis.

That would mean county residents wouldn’t have to travel to a large city, such as Toledo, to see them.

The new building would also allow some reallocating of space, bringing together some clinics that operate in two separate, disjoined offices.

Funding is from a United States Department of Agriculture loan. The total loan is for $54.6 million.

Once medical office building costs are deducted, the remainder will be used to pay off bonds that have higher interest rates than the USDA loan.

Since the USDA will reim- burse FCHC once the building is complete, a bridge, or construction, loan was obtained through Huntington Bank.

McCoy said FCHC traces its origins back to 1929, when the first Wauseon City Hospital was incorporated.

In January 1930, the Detwiler Hospital building was dedicated.

Today, that building serves as office space for Fulton County.

On April 8, 1973, the first 42 patients were transferred from the Detwiler Hospital.

Since 1973, there have been four additions to FCHC.

The first was an emergency room expansion, followed by the construction of the Fulton Manor nursing home.

Next was the original medical office building on the north side of the original building; then, in 2007, was an expansion of the emergency room and new sameday surgery suites.

Due to changes in the way patients are treated, the facility now has only 25 hospital beds available.