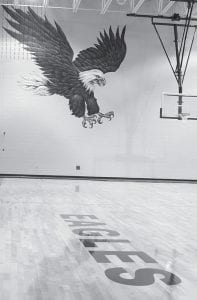 A giant eagle mural dominates one wall of the gym at the new Gorham Fayette School. The building, which was built with about 80% state funding, is about 85% complete. Students will attend the new school next fall.- photo by David Pugh

One wall of the gym at the new Gorham-Fayette School is dominated by a mural of an eagle, wings spread wide, talons outstretched.

“Uptown (in the old school building) we have a big beautiful eagle on the wall,” said Russell Griggs, district superintendent.

Griggs said there was a lot of concern in the community about losing the mural of the school mascot.

So school officials made sure that, “we have a big beautiful eagle on the wall” in the gym at the new school, he said.

The new 100,000 square-foot building has a final price tag of about $18 million; but the Ohio School Facilities Commission paid about 80% of the cost.

The commission uses state funds to subsidize the construction of schools throughout the state. Initially, money went to low wealth districts; today, Griggs said “medium wealth” district are being funded.

Gorham-Fayette, he said, is well below average economically, with between 30% and 33% of its students receiving free or reduced lunches.

But Gorham-Fayette had an additional factor. Chemical solvents from a nearby factory had polluted the groundwater under the Fayette school building, to the point that the chemical had been detected in a classroom.

The OFSC determined that Gorham-Fayette was facing an extreme environmental issue.

“That helped us qualify quicker” for the state money, Griggs said.

In a special election in August 2005, school district voters approved a $4.8 million bond issue, 59% in favor to 41% opposed, to fund the local match, plus a permanent half-mill (.5) operating levy for the new building.

The bond issue included $1.4 million for locally-funded upgrades of the building.

Griggs said the new building will be dedicated on Aug. 17. The first day of classes is Aug. 19.

When students arrive in the new building, they’ll find many surprises.

Each classroom will have its own heating and cooling unit. Gone are the days of teachers opening windows in the dead of winter to cool overheated classrooms, Griggs said.

Each room will have a “smart board” with a ceiling-mounted projector. Teachers can write on a special tablet and have their writing appear on the board, or show conventional video.

The building is split into the elementary on one side, high school on the other.

During school hours, there will be just two access points into the building, one for the elementary and one for the high school.

Visitors will have to speak with a secretary, and the secretary will have to push a button to unlock an inner door. Griggs said if someone is visibly agitated, they can be denied access.

There also are security video cameras monitoring the interior and exterior of the building, recording continuously.

Also split is the learning resource center, or library. On the elementary side the carpet pattern is the alphabet. The high school side has plain carpeting.

The second gym is a smaller elementary gym.

The stage is between the gym and the cafeteria, so programs and productions can be presented to either room.

Griggs said the new school will be less expensive to operate during the winter months, because of improved efficiency. Costs for the warmer months will be higher, because the building is totally air-conditioned.

Once the new school opens, the Fayette and Zone buildings will be demolished, including the 1999 addition to the Fayette building.

Griggs said the old Fayette building will be removed to ground level, then the foundations filled in and grass planted.

The Zone building would cost too much to renovate for any other purpose.

In the past, a low-wealth district like Gorham-Fayette may not have been able to afford an $18 million building.

“That’s been the strength of the Ohio School Facilities Commission program,” Griggs said.

“Just because you live in an area that’s not a high-wealth area, your child should still have the opportunity to go to a modern, technologically-advanced school,” he said.- David Pugh