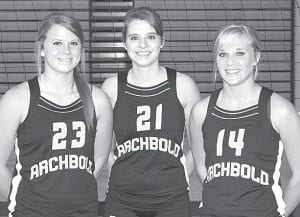 Sarah Wyse, Nicole Hurst, Alyssa Schaub, from left, are the three letterwinners back on the AHS volleyball team.– photo by Mary Huber

There has been a changing of the guard in Archbold volleyball.

For only the third time in Archbold history, there are new faces heading the coaching duties.

Dale Grime, an assistant for 18 years, has teamed up with AHS graduate Kylie (Ruffer) Rufenacht to lead the Blue Streaks.

Rufenacht has coached for five years.

Last year the Streaks finished 27-1 and a perfect 8-0 in the Northwest Ohio Athletic League before falling in the Division III regional championship match.

Graduation took its toll on the Streaks. They lost nine seniors, leaving just three letterwinners who have returned for the rookie head coaches.

“We are young and inexperienced, but we are hardworking, have positive attitudes, and have strong servers,” said Grime.

Grime thinks Evergreen will be at the top of the league race. Delta is defensively tough and Bryan is a team to watch for, he said.

“We should be competitive for the league title, but we will definitely have to fight for it,” said Grime.

“We have a lot of little things to work out to make us stronger.

“We open the season with Evergreen at their place on Tuesday, Aug. 31. We need to come out strong, seeing that this is such a big game right off the get-go.”