New Cell Tower To Be Operational This Summer 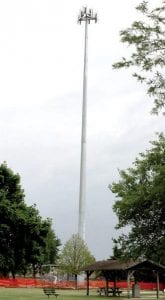 The new cell phone tower next to the street department garage on E. Holland St.

“As you noticed, yes, our cell site in the area is well underway with construction. We’re looking to having it up and running in the mid- to latter-part of the summer,” he said.

“One thing to note is this is a 4G LTE-only tower.”

“To take advantage of the additional coverage it provides, customers will need to have a 4G LTE-capable device (i.e. cell phone, tablet).”

He said 4G LTE “is the latest and greatest wireless technology, allowing for (data transfer) speeds up to 100 times faster than what we saw with 3G– up to 140 mbps (megabytes per second).”

That, he said, is faster than many home Internet services.

“It’s also a much more efficient way of using radio waves as well, meaning more people can use a cell site at any given time,” he said.