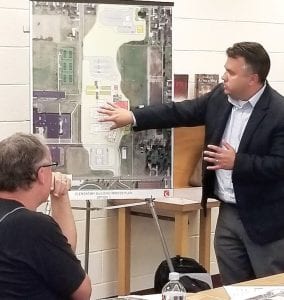 Dave Serra, a principal in The Collaborative, an architectural firm from Toledo, goes over one possible plan for a new addition to the Archbold Elementary School. District officials are considering moving middle school students into the elementary with a new addition, with some middle school students going to the high school. It would reduce costs for the district by going from three buildings to two.– photo by David Pugh

The Archbold School Board began looking at a building project for the middle school in a special meeting, Monday, Sept. 18.

The ultimate goal is to move the students out of the approximately 80-year-old current middle school building.

Early plans call for moving some middle school students to a new addition constructed at the elementary school.

Others would occupy space in the current high school.

The cost of such a project is not known at this point, Rex said.

Originally, school officials were thinking about available space in the buildings, Rex said.

They came up with the idea to put seventh and eighth grades into the high school, because it was built for more students than it presently serves.

Fifth and sixth grades would go into an addition at the elementary school.

“We thought that would be the most cost-effective,” Rex said.

“Then, as you have more conversations, you start to think, ‘well, what about this…’”

That, he said, was when school administrators began to rethink exactly what a new addition would look like.

During the special meeting, board members met with Dave Serra, a principal in The Collaborative, a Toledo architectural firm.

Serra passed out forms to board members and administrators, asking them what they need in a new addition.

There was also discussion about whether middle school students should be split between two buildings, or if fifth, sixth, and seventh grades should go to one building and only the eighth grade be incorporated into the high school.

There were also concerns about office space for the middle school, along with other issues.

Serra showed the board three alternatives, based on square footage.

All three showed additions north and northeast of the current elementary school.

The addition would break away from the “pod” design of the elementary school, which opened in 1997. New classrooms would be a more traditional design, with classrooms next to each other, connected by a hallway.

There would be entrances in the new addition for the middle school portion of the building and for after-school events.

The plans show the present elementary school cafeteria doubling in size, but administrators and board members commented about the distance from a new addition to the cafeteria as a concern.

On one plan, Serra asked how the traffic pattern would work.

Rex said the discussion began in 2013-14, when school officials brought in SSOE, an architectural and consulting firm, to do an assessment of the middle school building.

SSOE architects did the design of both the high school and elementary school.

“Basically, we wanted to know what kind of improvements do we need to make right now to keep the building up to the standard we want it to be, and then, what are some of the improvements we’re going to need to make long-term,” said Rex.

“Then we needed to try to decide how much those things were going to cost.”

SSOE told school officials within 10 to 15 years, “we were going to be looking at putting large amounts of money into the building, in terms of HVAC (Heating, Ventilation, Air Conditioning), roofing– just structural things,” Rex said.

“You’re talking millions of dollars to keep the building up to standards, because I think we have an expectation that our buildings stay in really nice shape in this community.

“So we want to have the best facilities we can.”

Rex said district officials began looking at available state funding, but the amount available may be 22% or 23% of the total cost.

It was noted during the meeting that to receive state funding, the Ohio Schools Facilities Commission has several requirements.

There are also some parts of a project the state won’t fund.

Serra said some districts declined state funding in order to have more control over their school designs.

After the SSOE report came in, Rex said school officials kept the board updated, “just letting them know what we’re working towards. We kind of developed a timeline for what we wanted to do, looking at that 10- to 15-year time frame from when we did the original study. You’re at 2024.

“That seems like a long time, but when it takes two years to build a building, and a year to plan the building, we wanted to make sure we had a plan in place even if it is six years away,” Rex said.

The special meeting was the first time the project was discussed in a public session.

Rex said initial studies, which only took square footage into account, showed a total addition of about 65,000 square feet.

That, Rex said, could change as options are added or deleted.

Serra said cost of construction is about $230 to $240 per square foot.

However, that figure is a very rough estimate.

Serra originally wanted board feedback within a week, and to meet again in a month.

But the board decided more time was necessary to think about the project, and decided to meet with Serra after Thanksgiving.

Jeremy Hurst, board member, reminded the board of a point Serra made– construction costs are escalating at about three percent per year.

Delaying the project increases the cost of the building.– David Pugh