Who Pays For Replacement Part? 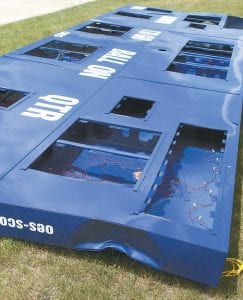 The damage to a section of the new AHS football scoreboard is shown. The scoreboard was sitting upright on a pallet that weighed over 1,500 pounds. A wind gust blew it over, causing the damage.– photo by David Pugh

A new scoreboard for the Archbold High School football field was blown over and damaged, Monday, June 19.

Aaron Rex, superintendent, said it has not been determined how the repair part will be covered.

“Two things could happen,” he said.

The school could file a claim against the district insurance carrier, who would cover the cost. The district would be required to pay a deductible.

The other option is for the manufacturer, OES Scoreboards, of London, Ontario, Canada, to provide a new part at a reduced cost.

Rex said the new scoreboard was delivered in pieces by semi. The damaged portion was on a 25-foot pallet with another part.

In total, the pallet weighed more than 1,500 pounds.

“We didn’t want to move it very far. We were nervous about damaging it,” Rex said.

Rex said school officials thought the sheer weight of the pallet would keep it upright. 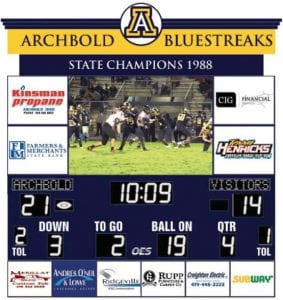 This graphic shows how the new AHS football scoreboard will appear when completed. The video screen will be larger, with a high resolution. The resolution is so good, that Aaron Rex, superintendent, said the district will show a movie on the screen.– courtesy graphic

“It had been sitting there for two weeks before one evening, wind gusts came through from just the wrong direction and tipped it over,” he said.

Only the metal framework, or “box” that encloses the electronics, is damaged.

The electrical components and the LEDs for the numbers (i.e., number of the current down, yards to go, etc.) are all undamaged.

The old scoreboard, which has been taken down from the mounting structure, was about 13 years old.

People noticed that the video screen portion of the board didn’t work properly during games.

When scoreboard operators tried to put a video clip or graphic on the screen, there was a line through it, or it would flicker.

“This had been going on for quite a few years,” Rex said.

“When we looked at replacing the video board, (it) is the most expensive” part of the scoreboard.

Scoreboards “don’t last forever. You have to replace them every 10 to 15 years.”

So rather than spend a large amount of money to repair an old scoreboard, which may have only two years of life left, the decision was made to replace it with a new scoreboard.

The new scoreboard will be updated but is about five feet smaller than the old 30- foot scoreboard.

“But the video board is larger, with higher resolution,” he said.

“They say you can watch a movie from the 30-yard line.

“We’re going to do that– show a movie in early August.

“It’s a really nice scoreboard the community will be proud of.”

School officials were able to have a hand in the design of the board. They picked the color, the color of the numbers (white) and other factors.

“We were given options,” Rex said.

One thing that was specified: the phrase “State Champions 1988.”

Rex said he worked with Royal Short, high school principal, and Allan Gladieux, high school athletic director, about what they wanted; then they met with a representative of OES.

Rex said the school board was kept apprised of the project, but was not required to vote to approve the expense.

The scoreboard is funded through a permanent improvement expense, which does not require board approval.

That does not include installation, but Creighton Electric, Archbold, is donating the labor to install the scoreboard.

“For someone to donate time and labor, that’s a big deal. A school district spends taxpayer dollars. This helps us out, and is greatly appreciated.

“When you have a great community, with great people like we have, when you have businesses and individuals willing to donate time and labor, it makes me proud to live in a community like this.”

While most of the pieces for the scoreboard are in Archbold, school officials are still waiting for the video board.

“The installation date is supposed to be late July or early August. When we found out (a part) had been blown over, they said four weeks would be the longest it would take.

“We’re hoping that (the video board) will be here in the third week of July or the fourth week, at the latest. Installation should take four or five days.”

It will be ready for the first home football game, Friday, Sept. 1, against Liberty Benton.­– David Pugh