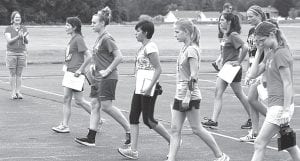 Beth Voll, formerly Beth Yoder, is an Archbold native, a 1999 AHS graduate, and a former member of the AHS marching band.

She married her highschool sweetheart, Josh Voll, another AHS grad, whom she met while the two were in band together.

She and Archbold have a lot of history together.

Voll graduated with a bachelor’s degree from Bluffton University in 2003. Her first job was at Riverdale High School, where she became the band director.

“When I became Riverdale’s band director there were 20 students in the high school band,” she said.

“Nine years later, there are more than 60.

In 2011, she received the Outstanding Hardin County Educator award after being nominated by one of her students.

She earned a master’s degree from Bluffton in 2012. 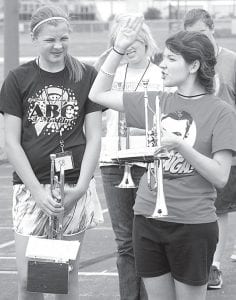 But she wanted to bring her family, which includes daughter Dana, 12, and sons Brad, 7, and Eric, 3, back to Archbold.

“I wanted to come back because of my experience as a child growing up in this supportive community,” Voll said.

“Also, my parents, uncles, aunt and grandparents live in Archbold.

“Coming home to work in a community in which we feel so at home in is a dream come true.”

After hearing through word-of-mouth that the band director position was open, she applied and was selected.

“I am often asked, ‘Why did you decide to become a teacher-band director?’

“My answer is one name. Mr. Hoverman.”

AHS bands under Hoverman’s direction won many awards, and traveled to major cities to march in parades. 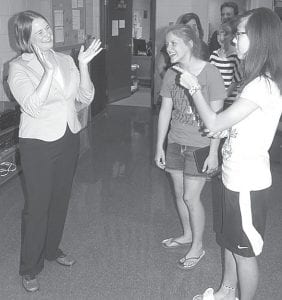 Hoverman, who still resides in Archbold, remembers Voll well as one of the band’s field commanders.

“In middle school, I was always amazed and mesmerized by Mrs. Krueger (Marlyn Krueger, former middle school music teacher) and her energy and excitement for music.

“Then in high school band, I was able to help Mr. H out a bit at the middle school with teaching some fifth graders and assisting Mrs. Krueger with some projects.

“That is when I found out that I really enjoyed those things.

“What always impressed me about Mr. Hoverman is how he held us to such high standards.

“We never thought to question if we could accomplish something or not. We just did it because Mr. Hoverman thought we could do it.

“He always emphasized that we were learning life skills in band, and it was absolutely true. 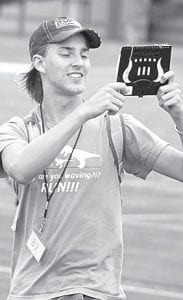 Riley Krueger, an Archbold High School senior and trombone player in the AHS Marching Band, looks carefully at his music while practicing a marching move during the AHS band camp. Band camp continues though this week, then wraps up with a performance for the public at 5 pm, Friday, Aug. 9, in the parking lot south of the football field.– photo by David Pugh

“We learned teamwork, dedication, motivation, pride for the community we represented in band, and how to express emotion together through music.

“I still use those skills today,” she said.

“Perhaps my favorite memory of high school band was marching down the street (West Holland Street) to the old football stadium (Spengler Field), following the ambulance and police cars, with Mr. Hoverman firmly encouraging us to roll step, chins up!” said Voll.

Hoverman explained roll step, sometimes called “glide step,” calls for a marcher to step down with the heel of his foot, roll forward onto the ball of the foot, then push off with the toe.

Roll step, Hoverman said, gives the marchers the appearance of gliding along, and it doesn’t jar their instrument mouthpiece as they play.

Voll said she had a special feeling as she marched.

“It was pride. We did it because we were a part of the Archbold Blue Streak Marching Band,” she said.

“It was pride in dedication, hard work, teamwork, and the Archbold community.”

While school has yet to start, Voll has already been hard at work meeting her students.

Last week, she began working with members of the band.

Band camp, a weeklong event in which band members learn their shows for the season, started Monday, Aug. 5.

“Already, my experience and interactions with students, parents and school faculty made us feel right at home,” she said.

“The most surreal part of becoming Archbold’s band director so far was moving into ‘Mr. Hoverman’s’ office,” Voll said.

“Of course, it hadn’t been his for a while, but the last time I was in the band room it was, and that’s how it stayed in my mind.”