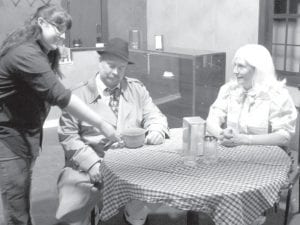 Jeff Roth, Pettisville, has previous on-stage experience, but with “Death By Chocolate,” he makes his first appearance in an Archbold Community Theatre production.

Roth has appeared in dramas at his church.

When asked why he tried out for “Death By Chocolate,” Roth said he has always enjoyed reading and listening to mysteries. He has attended several ACT shows in which extended family members were part of the cast.

Based on those experiences, he decided to try.

Roth is cast as Francois Lepew, one of the mysterious characters in the murder mystery-comedy show.

Roth said he was worried at first about memorizing his lines, but is enjoying the experience and getting to know his fellow cast members.

There are several veteran thespians in the “Death By Chocolate” cast.

Wauseon residents with roles include Michelle Johnson, sisters Angelina and Samantha Sorge, and the return of Myah Shaffer after a two-year absence from the ACT stage.

From Napoleon is Pearl Borton.

Vinnie the Leach has been found dead on the floor of the shop, and private eye Nick Noir, along with overly-devoted secretary Selma, take on the case with the goal of clearing Coco and Bonbon.

Dinner theaters are available for all shows.