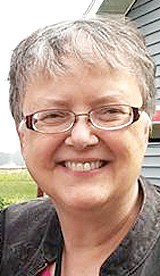 Bev Miller, 65, Wauseon, walks into a room with a friendly, confident, and professional aura.

She is a businesswoman, a friend, a communicator. She collects memorabilia from the 1950s. She’s been active in community theatre.

She is also bipolar.

Researchers now believe bipolar disorder, formerly known as being manic-depressive, is caused by a chemical imbalance in the brain that causes people to reach stunning highs of activity marked by inappropriate behavior, followed by incredible depths of depression, which, as Miller put it, leaves one “glued to the bed.”

Her disorder originally manifested itself in her early 20s. It led to two extended hospitalizations and a suicide attempt.

She is now on medication for her condition.

For Miller, bipolar disorder means, “I will be taking medication for the rest of my life.

After seeing a notice in “The Mennonite” magazine in 2012, Miller signed up to participate in a study of genetics and bipolar disorder being conducted by the National Institute For Mental Health in Bethesda, Md.

Miller said researchers discovered that Amish and Mennonites have large families, yet came from a few ancestors.

Plus, practically up until recent generations, the two groups tended to marry within their own faiths.

That makes their genetic makeups clear, meaning they are easier to work with.

Researchers, led by Francis McMahon, a physician, will be at Central Mennonite Church, rural Archbold, from 5-7 pm, Sunday, Nov. 5, to talk about the study.

Participants in the study give blood, and now, skin cells.

Miller said McMahon took skin cells from her while she visited the NIMH lab.

“He said they reproduce them and they can make other cells, including stem cells, and (in) his words, they make ‘mini-brains,’” she said.

“From that, they test the mini-brains with medication. Their goal is to find medications that keep people out of the hospital, keep people on an even keel, without having to go through the whole gambit of trial and error.

“In their study, they’re finding it’s more than one gene combination. They’re not finding one gene, but it’s a combination; therefore, they’re trying to find the medications that help this kind and help this kind.”

Miller said the researchers are always looking for Mennonite communities to continue their work.

“I said, ‘We have about seven Mennonite churches in this area. This might be a place you want to give your program.’”

While teaching math at a Mennonite high school in Oregon in 1975, something, possibly her living alone for the first time, triggered her bipolar disorder.

Isolated in her own apartment, she began delving into scripture.

“I was super spiritual. Mental illness is not a product of not being close to God,” she said.

She began having unrealistic thoughts, such as she was sure she was going to be arrested for being a Christian.

To prevent the authorities from finding her family in Ohio, she took a jacket that had the logo of the family business, M.E. Miller Tire, on the back, cut the logo out and burned it.

“It was just where my mind was headed.”

At one point, she decided she would never speak again.

“In my unrealistic mind, what was I going to do Monday morning when I went back to teaching? But it (not speaking) was fine for the weekend.”

It was bizarre behavior in church one Sunday that led to a call to her parents, who flew out and took her back to the Midwest to a hospital, and later, a psychiatric facility.

“I do not know the moment my mind cleared,” Miller said.

“When my mind cleared, it was horrible to believe all that I had ever done successfully had now been scrubbed, voided. So I had a terrible depression– which started in the fall of 1975 and lasted through 1976.”

In January 1977, she entered another period of mania.

“I suddenly had this big turnaround. I started being busy, busy, busy,” she said.

“The mania is like taking a common idea, and taking it totally beyond context.”

There was a second hospitalization later.

Today, with medication and counseling, she’s doing well. She has the ups and downs of “normal” people.

She does not hide her disorder, and she talks about it, but she doesn’t want it to become the defining part of her life.

“I have a great life. I really do,” she said. “I have great friends. And I love being single.

“I wasn’t always loving being single, but one thing about being single, I can say and do what I want and need to do, and I don’t worry about my husband saying, ‘You shouldn’t talk about it.’

“I have great relationships. I may live alone, but I’m not lonely.”