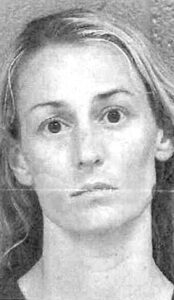 “We are pleased to report that after an extensive joint investigation by the Napoleon Police Department, the Allen County (Ind.) Sheriff Office, and the United States Marshal Service, Ellert is in custody.

“This morning (8/19) Ellert was tracked to a location in Columbus, and was taken into custody by U. S. Marshals,” Legg said.

She is currently being housed at the Franklin County Ohio Corrections Center, awaiting extradition to Henry County to face an escape charge, and Allen County, Indiana for the original charge of arson.

Napoleon police are searching for a woman who escaped from a private prisoner transport company, Thursday, Aug. 12.

Brittney Jayme Ellert, 34, 5-9, with blond hair and brown eyes, was being transported by the U.S. Corrections Company when she got away at a truck stop in Napoleon.

As of Tuesday morning, Aug. 17, she was still at large.

The press release said at the time of her escape, she was wearing plaid shorts, a black shirt, a yellow and white jacket, and flip flops. She was also wearing a belt restraint, and one hand was handcuffed to it.

Ellert was being transported from Mechlenburg County, N.C., to Allen County, Ind., on an original arrest warrant for felony arson. Additional charges of escape are pending in Henry County.

Those with information should call Napoleon Police, 419-599-2810, or their local law enforcement agency.–David Pugh