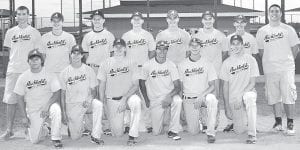 After losing to Archbold two straight games– in the North sectional final and in the secound round of the district tournament– Napoleon roared back to defeat the Streaks two straight times to win the District 2 championship, Monday, July 16, at Archbold.

The Wildcats advance to the state tournament at Bryan, where they play the host Golden Bears, Saturday, July 21, 7:30 p.m.

The Streaks bow out of tournament action with a 21-7 record.

Wildcat pitcher Zach Willeman had a no-hitter going until the bottom of the fifth inning, when Tyson Schnitkey hit a base hit up the middle.

Willeman allowed only one other hit, a pop-up to left field.

Napoleon took a 2-0 lead in the second inning and widened it to 5-0 in the third. Zack Fielder hit a home run in the fifth to complete the Wildcats’ scoring. 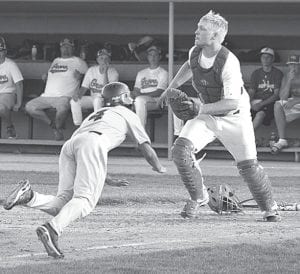 Jase Grosjean slides under the tag of the Columbus Grove catcher and scores the winning run in Archbold’s 5-2 victory, Friday, July 13.– photo by Mario Gomez

Dietrich was the losing pitcher. In 2 innings he allowed four runs on six hits, struck out one, and walked one.

The Wildcats broke a 2-2 tie after three and scored six runs in the last four innings to defeat Archbold 8-3, Sunday, July 15.

Brian Flowers’ base hit brought home two runs to give Napoleon a 2-0 lead with one out in the third inning.

The Streaks came back in the bottom of the inning, scoring two runs of their own. After Jase Grosjean and Michael Walker each reached base on singles, Napoleon’s pitcher was called for a balk, bringing home Grosjean.

Evan Wyse hit a triple to right field to score Walker for a 2-2 tie.

The Wildcats scored twice in the fourth with two outs to take a 4-2 lead.

Archbold scored its final run in the fifth when Schnitkey’s double to left field scored Wyse, who had gotten to base with a single. 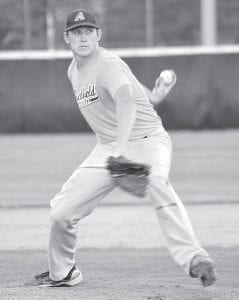 Tyson Dietrich was the winning pitcher on the mound in Archbold’s 5-2 district victory over Columbus Grove, Friday, July 13. In seven innings he allowed two runs on five hits, struck out six, and walked three.– photo by Mario Gomez

Napoleon scored three times in the sixth and once in the seventh for the 8-3 fi- nal.

Schnitkey was the losing pitcher. In 5 2/3 innings he allowed seven runs on 10 hits, struck out eight, and walked three.

An Archbold win would have put the Streaks into the state tournament as the winner of the winners bracket in the double elimination tournament. Instead, Archbold and Napoleon played Monday, July 16, for the district title.

The Streaks defeated Napoleon 12-6 in the semifinals of the winners bracket, Saturday, July 14.

Led by Zac Zimmerman’s three-run home run in the third, Archbold exploded for five runs in the inning for a 7-3 advantage. 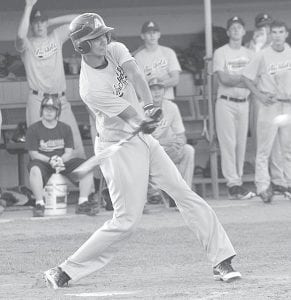 Napoleon scored three runs in the top of the fourth to close the gap to 7-6.

The Streaks then took control, scoring once in the fourth, three times in the fifth, and once in the sixth for the 12-6 final.

Archbold had 10 hits in the contest, and was led by Zimmerman’s three RBI home run. Schnitkey was 2-4 with a double and RBI. Dietrich hit two singles, while Grosejean hit a triple. Short hit an RBI double.

The loss sent Napoleon down to the losers bracket, where the Cats defeated Holgate 11-1 to play Archbold again for the district title.

The Streaks defeated Columbus Grove 5-2 in their first game of the district tournament, Friday, July 13. 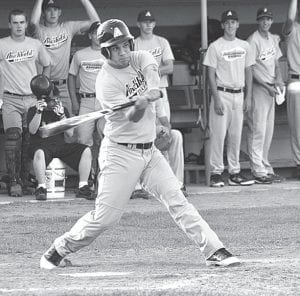 Grove led 2-0 after two, but Archbold took a 3-2 lead in the third. The Streaks scored two insurance runs in the sixth for the 5-2 final.

Archbold had 11 hits, and was led by Walker, who went 4-4 with two RBIs. Schnitkey went 2-3 with one RBI. Short went 2-3 with a double, and Price hit two singles.