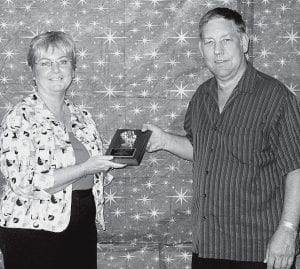 Over the years Nagel has appeared in ACT presentations, handled numerous duties off stage, and served the organization in various ways. Behind stage she helped with costumes, makeup, publicity and children productions. One ACT member said there probably isn’t much Mel hasn’t done for the local theatre group.

She received the award during ACT’s annual meeting at Giffey Hall, Ridgeville Corners.

She and her husband, Dick, reside in Archbold.

The award honors the late Mary Short (Mrs. Theron). She and her husband were among the early active members of ACT. They appeared in serious and comedy productions, helped build sets, find costumes, planned advertising, and handled the bookkeeping for years.