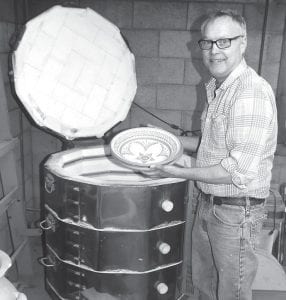 Mark Nafziger, potter at Sauder Village, removes a bowl from the kiln, one of the thousands of clay pottery pieces he hand makes. This year, he is creating a special plate commemorating the 50th anniversary of the Fairlawn Haven Auxiliary Auction. With the April 8 auction date approaching, he jokingly said the special plate may still be warm from the kiln when he delivers it.– photo by David Pugh

Mark Nafziger, the potter at Sauder Village, has made thousands of items over the years.

Each is hand-formed and decorated, so it is individual; yet each item is the same.

But right now, he’s working on one piece that will be one of one. The only one of its kind.

Nafziger is making a platter to commemorate the 50th anniversary of the Fairlawn Auxiliary Auction.

This year, the auction starts with the preview on Thursday, April 7, at Founder’s Hall.

The auction begins on Friday, April 8, at 5 pm.

Nafziger said he was initially approached by auction organizers about doing something specifically focused on the 50th anniversary.

“Basically, I’m doing a platter, a plate, and this is, of course, if everything turns out properly.

“I wanted to do the design such that it would commemorate the event without being a piece that would be blatant. When you display it, it wouldn’t be a blatant advertisement of the event.

“So the design will be the Fairlawn logo. Any commemorative information will be on the back side of the plate, so if one wants to use it as a serving piece or a piece to display, it would be a piece that the decorative element of the Fairlawn logo would just be there, but not specifically jump at you, and say this was just for” the 50th anniversary, Nafziger said.

Adding 50th anniversary elements to the front of the platter would make it “look more like a plaque. I want it to be a plate that would just stand on its own, for its own decorative merits. That’s the idea,” he said.

The idea to use the logo for the plate came from discussions with auction organizers.

“The idea arose of looking at the logo they use on their website, and on various (public relations) stuff like their newsletter.

“When I looked at it, I said, ‘That will be wonderful. This tree, with the ‘F’ for Fairlawn becoming the trunk and the branches; I thought it would work very nicely.”

The plate, like all pottery work, is formed from clay.

“I’ve had it formed for a while, ready to decorate. I decorate when it’s completely dry,” said Nafziger.

“I draw on the piece with colored clay. That’s how I get the design on there. Then it’s fired once” to around 2,000 degrees.

After it’s fired once, a glaze coating is applied, and it’s fired a second time.

“The thing with doing pottery is, it would be one thing if I had just one plate or platter to make, but when you fire the kiln, I need 300 pieces to fill the kiln. It’s not just one piece you have to have ready,” he said.

Even if he did want to fire just one piece, it wouldn’t work.

“The kiln would not fire properly with just one piece in there,” he said.

A friend of Fairlawn, an anonymous donor, will then purchase the plate from Nafziger and donate it to Fairlawn. It will cross the auction block Friday.

Nafziger said things have been hectic for him recently, “but hey, I’ve still got two weeks!

“It may still be warm when I deliver it.”–David Pugh