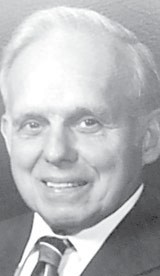 Myrl Robert Zimmerman, age 92, passed away at Fulton Manor, under hospice care, on Thursday, May 4, 2017, with his loving family by his bedside.

He was born on Oct. 19, 1924, in his home in Clinton Township to the late Clarence and Emma (Kline) Zimmerman.

At age 17, he began work fulltime on the family’s 400- acre farm with his father and brothers. In addition, they owned their own equipment and specialized in custom thrashing.

He served in the 7th Air Force Communication Division in Hawaii for 18 months, working as a radar operator being honorably discharged in 1947, reaching the rank of corporal.

Upon his return to Wauseon, he took employment with Saunders Redi-Mix, driving a 2-yard mixer. After a short stint behind the Redi-Mixer wheel, he found his life’s calling– carpentry.

Beginning in 1951, he started working in the construction trade, which spanned 60 years and included working for various employers, including Melvin “Bub” Wyse, building quality ranch-style homes.

Twenty-five years were spent working with various employers through Carpenters Union Local 351 in the Toledo area.

Returning to Wauseon, he worked for Eberly Construction, building the golf course apartments. For 60 years, he performed many evening and weekend jobs.

Myrl loved sports– from listening or watching the Detroit Tigers to watching his grandkids’ activities.

He is survived by a son, Tom (Deb); a daughter, Lynda (Brent); grandchildren Tiffany, Casey (Brittany), Tyson; and great-grandson Luke.

He was a member of St. John’s Christian Church, the Wauseon American Legion, and Toledo Carpenter’s Union Local 351.

Burial at Wauseon Union Cemetery took place at 10 a.m., Tuesday, May 9, 2017, and preceded the Celebration of Life Service at 11:30 a.m. at St. John’s Christian Church, Archbold.

The family requests that memorial contributions be made to St. John’s Christian Church.

Short Funeral Home in Archbold was entrusted with the arrangements. www.ShortFu neralHome.com.