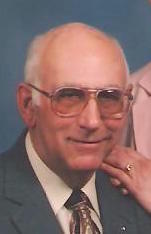 Myrl Lowell Short, age 87, of Wauseon, passed away Friday, May 6, 2016, at the Fairlawn Haven Nursing Home in Archbold.
Myrl had worked for the former Eckert’s and Lugbill’s in Archbold, he then went on to be a meat grader for the United States Department of Agriculture for 30 years.
After that, he worked in maintenance at the Sauder Village for 18 years.
He had lived in Des Moines, Iowa and Bellefontaine, Ohio, before returning to Wauseon.
Myrl was born in Henry County on Dec. 4, 1928, the son of Emil and Mary Ann (Rupp) Short.
On March 19, 1955, he married Alice Ruth Russell, and she preceded him in death in 2014.
He was a graduate of Ridgeville Corners High School in 1946.
Myrl was a member of the First Baptist Church in Wauseon.
He was an avid Cleveland Indians fan and enjoyed farming, Farmall tractors, horses, construction and tinkering. He was a devoted husband to Alice for 59 years.
Most of all, he loved his family and cherished spending time with them.
Surviving are children, Dave (Kim) Short of Franklin, Ind., Susan (Tim) Shipley of Wauseon, Daniel Short of Wauseon; three grandchildren, Erika Short, Daron (Rachael) Short, and Tyler Shipley; and great-grandson, Evan Russell Short. He is also survived by his sister-in-law, Phyllis Short of Pettisville.
He was preceded in death by his wife, Alice, and siblings Beulah Grimm, Evelyn Short, Cornelia Short, Maynard Short, Velma Beck, Lownetta Shady, Valetta Werder and Herb Short.
Visitation for Myrl will be held from 2 p.m. until 6 p.m. on Sunday, May 8, 2016, in the Chapel at Fairlawn Haven Nursing Home in Archbold. Memorial services will be held at 11 a.m., Monday, at the First Baptist Church in Wauseon, with Pastor John Shirley and Pastor Ron Shipley, officiating. Interment will be in the Pettisville Cemetery.
The family requests that memorial contributions be given to Daron (grandson) and Rachael’s medical expenses.
Online condolences may be offered to the family at www.grisierfh.com. Grisier Funeral Home in Archbold has been entrusted with arrangements.-Posted 5.8, 2:20 pm