Municipal Tax Up Near 400% For June 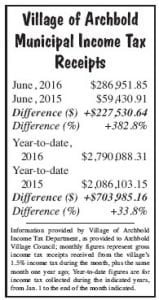 Archbold Village Council learned municipal income tax collections for June were up about 382.8% over the same month in 2015.

The information was presented to council during its Monday, July 11 meeting.

She said Pat Dominique, village income tax commissioner, told her the increase might be an anomaly.

“It’s still fun to see for half a year,” said Vaughn Bentz, councilman.

Dreams that do come true can be as unsettling as those that don’t. –Brett Butler