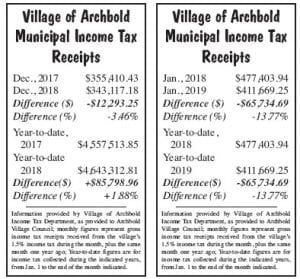 But it wasn’t as much as had been predicted.

Donna Dettling, village administrator, told council at its Dec. 3, 2018 meeting, an increase of 3% had been predicted.

At the Monday, Feb. 4 council meeting, Dettling said the total municipal tax collection for the month of January, when compared to the same month one year ago, is off by almost 13.8%.

But it may not be as bad as it looks.

Dettling said payments had not been received from two large municipal taxpayers. She didn’t know the reason those payments didn’t arrive.

The problem could have been with mail delivery.

“We hope February will make some of that up,” she said.

The municipal tax collection set a record in 2016, adding more than $4.9 million.

The previous record was set in 2006, when collections were more than $4.8 million.

The village first began collecting a municipal income tax in 1967. Since then, total gross collections through the end of 2018 were $125.4 million.

Of the 15 communities reporting to the Northwest Ohio Tax Commissioners’ Association, seven had a gain in municipal income tax collections from 2017 to 2018.

Oregon had the highest increase, at 8%. Much of that was attributed to a large profit at the BP refinery there.