George W. Gasche in 1929, two years before his death. The photo was taken by a door-to-door photographer.- photo courtesy Fulton County Fair Board

The 3,794-seat grandstand in use today at the Fulton County Fair is a sturdy structure of concrete and reinforced steel built during the summer of 1950 by a crew of skilled craftsmen under the watchful eye of construction engineer Clarence J. Keller.

But before it arrived on the scene, there was another grandstand that sat in its place- the one built in 1894 by George W. Gasche, a farmer from Pettisville.

Years later, George’s greatgrandson, Del Gasche, wrote a story about his ancestor for the local paper.

It included a picture of George taken in 1929, the postcard the Fair Board sent to tell him he was hired, and a number of George’s diary entries, including these from 1894:

May 18 – Drafting the plans for the Fulton County grandstand.

Above, the Fulton County Fair’s original grandstand in 1949, 55 years after it was built by George Gasche for $1,066.50. Below, a new grandstand constructed of concrete with reinforced steel, was built in 1950. For decades following the first appearance of an automobile at the Fair, fairgoers simply parked wherever they wanted to on the fairgrounds. It wasn’t until the early 1990s that general admission and grandstand show parking was moved outside of a fence that encircled the midway, fair buildings, and camping area. – photo courtesy Fulton County Fair Board

June 1 – Attended a meeting of the Fair Board tonight.

June 17 – Another grandchild. Etha has a baby girl.

June 18 – Attending to the brick and lumber for the Grandstand. Walked 29 1/2 miles today.

June 20 through 24 – Laying the walls for the Grandstand.

July 1 – Stayed home all day figuring on frame and bricks for Grandstand.

July 2 through 7 – Working on Grandstand. Framing and laying brick.

July 9 through 14 – Working on Grandstand. Layed the sills, framing.

August 13 through 17 – Fastening down seats. Siding and ceiling. Finished on the 17th. Worked 95½ hours to build the Grandstand. 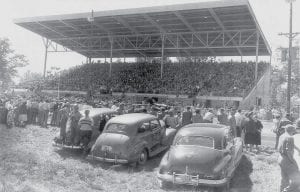 August 25 – Attended the Fair Board meeting. The building committee, including the entire Board, accepted my Grandstand with perfect satisfaction.

August 27 – To Wauseon to bicycle race. Sat in my Grandstand.

Thursday at the fair used to be called “Archbold Day,” said Sanford Nofziger, who has attended the fair since age 16 in 1931. Among other features of the “holiday,” the Archbold marching band performed.

The only barn on the fairgrounds that’s painted red is the Baby Animal Barn, a Wauseon FFA project that gives children unfamiliar with farm animals the opportunity to get up close and personal with them at their cutest and cuddliest: as babies.