It was a little jarring to see men and women carrying assault rifles around the Sauder Village Green; but it was all “make-believe,” as a movie crew was using the Village as the set for an independent film.

ConradStudios, Cleveland, rented Sauder Village, Monday, July 9, to use as the set for “The Wind Is Watching.”

Conrad Faraj, the director, said the film is set in the year 2037. A nuclear spill has contaminated most of the earth’s fresh water, and as a result, the government begins regulating all fresh water.

The government becomes tyrannical, and the United States turns into the United Militia of America.

They are opposed by “The Rebellion,” individuals who stand together to fight and take back the country.

The story centers on a girl trying to survive the war and reconnect with her family. 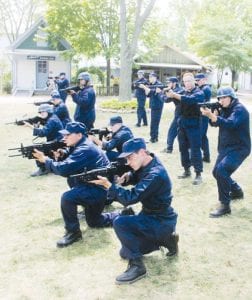 Attack on Sauder Village? Actually these “troops,” armed with movie prop assault rifles, are part of “The Wind Is Watching,” a independent film project that spent a day filming at Sauder Village, Monday, July 9.– photo by David Pugh

While a motion picture shot by a Hollywood studio can cost hundreds of millions of dollars to make, Faraj said they’re shooting “The Wind Is Watching” for about $50,000.

One advantage he has: the director of production owns the special video camera being used to shoot the film.

Faraj said producer Jason Ross “was the one who mentioned Sauder Village.

“He said, ‘I know a fantastic place in Archbold that we could use for the village attack.’

“I looked at some pictures, and I said, ‘Okay, I might take a look at it.’

“We drove over here with some of the producers, and it was fantastic. 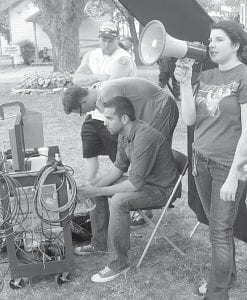 Conrad Faraj, seated, director of the film, “The Wind Is Watching,” on the set at Sauder Village, Monday, July 9. The independent film crew’s goal is to be part of the Sundance Film Festival in Utah next year.– photo by David Pugh

Sauder Village had “a natural feel to it, a very homey feel to it that we wanted for the film. It was just beautiful,” he said.

Faraj said Conrad Studios rented the village for the day.

Faraj said the crew shot the “village” scenes at Sauder Village, and planned to do some interior shots inside the 1910 farmhouse, but other interior scenes may be filmed at other locations.

“It’s kind of cheating, but movies cheat all the time,” he said.

Nicole Ann Hicks plays the girl the story centers around. She has previous independent film experience, moving to Kentucky to take part in “Another Apocalyptic Zombie Movie.”

“Very funny and goofy,” she said.

She was planning to move back to Los Angeles, where she’d gone to acting school, but discovered “The Wind Is Watching” on the Internet.

“I saw they were actually looking for the main cast,” she said.

“I thought, ‘Well, I’ve only auditioned for a couple of things, but I guess I’ll go and see what it’s like, and if anything it will give me experience.’

“They called me back for four callbacks, and it was quite a while before I found out that I got the part. I was really surprised, and honored, and super happy.”

She said the Village Green setting “is absolutely perfect. It’s gorgeous; it’s exactly what I imagined the rebel camp would be like.

“The house we’re shooting the scene in today is perfect; it’s exactly how you would imagine it when you read the script. It’s so old and vintage looking, it’s perfect.”

Hicks is not your classic Hollywood, “I’ll be in my trailer,” star.

“I do understand it’s low budget. Anything I can help with, I want to help,” she said.

Does she have big dreams?

“I do. Maybe one day, I’ll be thanking that one guy who gave me that first interview.

“I have dreams, but I’m just having fun right now, and hopefully, something comes out of it.”

Faraj said the goal is to show the film at the 2013 Sundance Film Festival in January. He hopes a distribution company will pick up the film and release it to theaters, into limited or wide release.

That presents a challenge, because officials at Sundance want a rough cut of the movie by Sept. 20.

That means shooting has to be complete; visual effects and music must be added; and then all the scenes must be edited together.