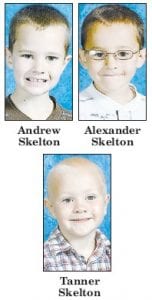 Tanya Zuvers wants to know where her children are.

Her three sons, Andrew, Alexander, and Tanner, have been missing for two years despite the efforts of the Morenci, Mich., police, the Federal Bureau of Investigation, hundreds of volunteer searchers, and fire-rescue departments from two states including Archbold, Fayette, Wauseon, and Ridgeville Corners.

The three brothers, ages 9, 7, and 5, were last seen on the afternoon of Nov. 25, 2010, (Thanksgiving Day), playing outside the Morenci home of their father, John Skelton.

At that time, Zuvers and Skelton were in the midst of divorce proceedings. He had custody of the boys.

The Friday after Thanksgiving, Skelton attempted to commit suicide in his home. A friend took him to a Toledo-area hospital.

Skelton has told different stories about what became of his sons.

In one, he turned the boys over to an underground organization to prevent them from being abused at the hands of their mother. Law enforcement could not confi rm that such an organization existed.

He also said he turned the boys over to a woman he met on the Internet. Officers again were unable to confirm the report.

A report of a sighting in a Sandusky donut shop three days after they disappeared revealed nothing.

In the days following the disappearance, searchers combed parts of Lenawee County, Mich., and Fulton and Williams counties in Ohio.

The boys were never found.

At the same time, national press and electronic media descended upon the community of about 2,400, and the story of the missing brothers went nationwide.

As the second-year anniversary of the disappearance approaches, Zuvers said the Morenci police still follow leads they receive.

“We have a Facebook page (Missing-Skelton Brothers, Morenci, Michigan) some family members are in charge of. Every now and then, we get tips through that,” Zuvers said.

Recently, a tip provided by Facebook told of a boy at a mobile home in an out-of-theway location who shouted “my name is,” but the person couldn’t make out the name.

“That didn’t set right. It really bothered her,” so she provided the information via the social media site.

Zuvers said the next day, Larry Weeks, Morenci, Mich. police chief, was checking out the story.

Since February 2011, law enforcement has treated the case as a murder investigation.

Zuvers said, “Even though they look at it as a murder investigation, they still follow up. Larry told me, ‘I want nothing more than to bring your boys back to you.’”

She said support has come from the entire community.

“I’ve always known I live in a great town. But now that I’ve had my own physical tragedy, I don’t have words to explain the outpouring of support I have received,” she said.

People still ask what they can do to help.

Even so, it’s not been easy for her.

“I hit rock bottom. I put myself in the Stress Center in August of 2011. There were a rough few months,” she said.

“I have a copy in my wallet. I carry it with me everywhere,” she said.

“The thing I can’t change is the boys can’t be here with me.

“I can keep hope, keep faith.”

Today, she has a full-time job, “and I’m starting to get back into things. This is my life right now. I have to continue living my life.

“I have a granddaughter now, that’s a huge uplift for me.

“I’m a different, stronger person than I was before. This is who I’ve had to become.”

On Sunday, Nov. 25, a two-year anniversary event called an AAT (Andrew, Alexander, Tanner) Event will be held in Morenci.

People will gather in Morenci’s Wakefield Park at 3 pm by the three trees planted in honor of the boys in the fall of 2011.

A plaque will be unveiled, and if available, three photos of the boys as they may look today will be shown.

Following that, the event moves to the Morenci Fire Station, where Christmas ornaments will be decorated.

Then, back at the park, Chinese lanterns will be released.

Perhaps the only person in the world who knows the fate of the boys is their father.

Today, he’s in prison at the Alger Correctional Facility near Munising, Mich., in the Upper Peninsula.

Only one prison is farther north than Alger.

“He grew up in Florida. He hates the cold.”