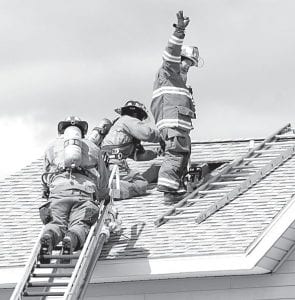 A Morenci, Mich., firefi ghter is hospitalized at Toledo Hospital after he fell ill battling a house fire in the 16000 block of Co. Rd. 19, Sunday, Sept. 9.

Bob Stillion, Fayette Fire Department chief, said the firefighter, whose name was not available, was in the Toledo Hospital intensive care unit Monday.

Stillion said the firefighter came out of the house and said he wasn’t feeling well. He was sent to an on-scene rehabilitation area, where medics checked his condition. He was then taken to the Fulton County Health Center.

From FCHC, he was transported by helicopter ambulance to Toledo Hospital.

Brett Casey owns the home. He and his family were not at home at the time of the fire.

At the scene, smoke was showing from every window. Some of the windows at the back of the house had broken, and flames were billowing out of the windows.

Stillion said the fire had smoldered for a long time, putting a lot of heat and smoke into the structure. Firefighters ventilated the house to prevent a flashover.

Once the house was ventilated, they were able to make an interior attack and extinguish the flames.

Fire damage was limited to the rear of the home. The rest of the structure suffered heat, smoke and water damage.

He estimated the damages at about $160,000 to the house and contents.

Stillion said the cause of the fire is under investigation.

Officials of the State Fire Marshall office have visited the scene.–David Pugh