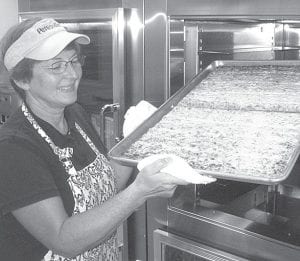 Brenda Aeschliman, head cook for the Pettisville Local School district, removes a tray of garlic flatbread from an oven in the school kitchen. In addition to more fresh fruits and vegetables, Aeschliman said the kitchen staff is trying to add more variety to the lunch menus.– photo by David Pugh

A new government requirement for school lunches, calling for more fresh foods with more fruits and vegetables, is creating problems in some schools.

They’re seeing some of the healthy foods going right from students’ trays into the trash can.

But officials from the Archbold and Pettisville school districts said they haven’t had that problem.

“I’ve asked, and there’s been no increase (in food going into the trash) in any of our buildings,” said Joe Long, interim superintendent at Archbold.

“That’s always been a concern at the elementary, but at the high school and the middle school, we offer enough choices. Today, it’s cauliflower or coleslaw. If they had to take one, caulifl ower would typically end up in the trash,” Long said.

Long said school lunches must meet many of the old criteria, but he said Sandy Babcock, the head cook, spends more time reporting on sugar and fat contents of lunch menus.

“Today, our vegetables are corn and cucumbers,” she said.

“We have two choices of fruits and vegetables every day,” she said.

“In general, we do really well.”

Both schools are trying new things.

Long said at Archbold, they’ve ordered kale, a member of the cabbage family.

“We’ll see what the response is, and if it’s not a mover, we’ll use other options.”

He said kale and fresh spinach are being added to salads, and the kitchen staff is mixing beans with hamburger in burritos.

For example, Pettisville recently received a supply of garden-fresh peppers. She said this summer’s drought has created some problems in obtaining fresh local produce.

Of course, government commodities are still available. They’re mixing those foods with local, fresh foods to give school lunches a bit of a twist, and make the meals attractive to students.

Aeschliman said a student who attends Pettisville from kindergarten through high school graduation will spend 12 years eating in the school cafeteria.

“Students are eating out more” in restaurants, she said.

“They need some variety.”