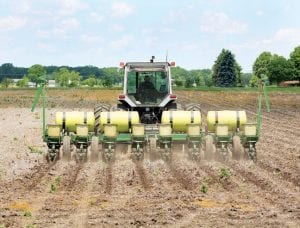 Some area farmers were able to get into their fields late last week.

But rain on Sunday, June 9, including up to 1.5 inches north of Archbold, shut down whatever planting had started.

“My survey shows approximately 17% across the entire county. That’s in pockets.”

Sunday’s rain, he said, was spotty across the county.

“I heard they got ninetenths (.9) of an inch of rain overnight (Sunday into Monday, June 10), and in some parts of the county, I heard over an inch and a half (1.5 inches). That’s pretty significant,” he said.

But, “this was the first rain that was really this spotty, from one- to two-tenths (.1 to .2) of an inch in some parts of the county all the way up to an inch and a half.

“Generally, a lot of the rain previously this spring kind of blanketed the county.”

Richer said the window “for planting corn is closing. I hear guys that are still going to be planting some corn, but generally, if you’re still intending to plant corn, you have livestock; cattle, dairy, or hogs.

“A lot of the guys that don’t have livestock responsibilities have made the decision to take the prevented plant” option on crop insurance.

What has been a bumper crop so far this year? Weeds.

“There are obviously some fields that are getting very weedy, and guys want to terminate them.

“They’ll do so, I think, when they feel like they won’t get stuck, or they’ll go around the water holes,” or ponds and wet areas in the fields.

“Once guys have decided to take prevented plant, and they know they got their weeds under control, we want to encourage them to plant a cover crop, or prepare to plant alfalfa in August, or small grains in September.

“We want to do what we can to get a growing and green crop on those prevented plant fields to help prevent erosion, hold nutrients, and absorb water.”

Farmers can plant alfalfa by August 1, or wait and plant small grains such as wheat, barley, oats, and rye in September.

“Some guys might plant some oats for forage in the fall,” he said.

To find a similar situation in the farm community, one has to go back to 1947.

“The oldest generation of farmer out there, many of them agree that 1947… was very similar to this,” Richer said.

“I had a crop insurance meeting with 125 guys, and there were about four guys in the room who said, ‘Grandpa said 1947 was the worst year ever.’ That’s an interesting piece of history.

An article from the Wednesday, June 4, 1947, issue of the Archbold Buckeye states, “Nearly an inch of rain fell Sunday (June 1) in this area, adding greatly to the volume of water covering farms in this community, and further delaying planting of spring crops.

“Farmers have been waiting for weeks, hoping the incessant rains would end by Memorial Day.

“When the sun came out brightly on Friday (May 30), tillers of the soil had hopes of clear weather, and felt they could plant corn and other crops this week.

“Monday (June 2), another half inch of rain fell, but on Tuesday, the sun came out and added cheer and hope to the agricultural picture upon which this community is dependent for its success.”

Seven days later, on June 11, 1947, the Buckeye reported, “A break in the weather, clear skies and freedom from rain has put farmers in the fields in the rich area around the Archbold community, working on an almost 24- hour basis.”

The article stated, in this area, “planting of corn has been going on for several days, and tomato plants as well as soybean seeds are being placed in the wet earth, in hope that a delayed frost next fall will permit crops to mature.”

Staff members at the Ohio State University Agricultural Experiment Station said at the time, they expected the state to produce enough crops to feed its people and livestock.

Then, an article in the June 25, 1947, issue of the Buckeye said, “Eight days without rain has greatly helped farmers in the area to put crops in the earth, in hope for ideal growing conditions and a late harvest.

“The short, dry spell that started a week ago Monday (June 16) and continued until yesterday afternoon (Tuesday, June 24), when a light shower fell, has aided tillers of the soil in getting seed beds ready.”