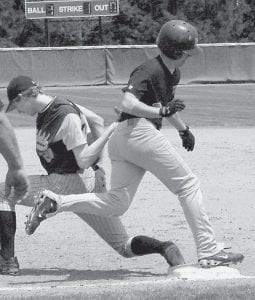 Archbold’s Marc Miller tags out a Montpelier runner at first base, but suffers a hyperextended elbow and ligament strain on the play. Miller was expected to play in the Streaks’ contest last night, Tuesday, against Wauseon.- photo by Mary Huber

The Streaks and Montpelier squared off in the Division III sectional tournament at Archbold, Saturday, May 10, with the Locos picking up a 4-1 victory.

The Blue and Gold was held scoreless through six innings and mustered just one run in the top of the seventh.

Montpelier’s four runs came in the bottom of the sixth.

Archbold came up with four hits, with David Dominique going 2/4 with one run batted in.

NO for the Locos, giving up one run on four hits, striking out seven and walking two in seven innings.

Archbold traveled to Delta, Thursday, May 8 and suffered a 10-8 NWOAL loss to drop to 3-4 in the league.

Trailing 10-4 in the top of the seventh, the Streaks rallied for four runs but fell short in their comeback bid.

Paxson Miller suffered the loss, going 4 1/3 innings and giving up five runs on four hits, striking out one, and walking one.

Archbold was shut out 10-0 at Patrick Henry, Monday, May 5 in an NWOAL contest.

Rupp suffered the loss, going 3 1/3 innings and giving up eight runs on six hits, striking out three and walking four.