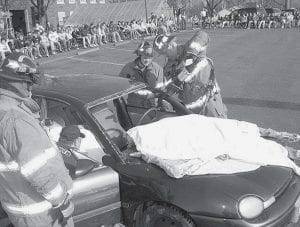 The Pettisville High School FFA Healthy Lifestyles Committee, in cooperation with the Wauseon Fire Department, staged a mock accident at PHS, Friday, April 11 for high school students. John Poulson, FFA advisor, said it was staged to remind students to Be Smart, Be Safe, Be Sober for the coming prom and graduation season. In the photo, Wauseon Rescue workers Sean Rossman, Bob Wyse, kneeling in car, Derek Meyer, and Brian Kuney attend to Samantha Pursel, playing the role of an injured student inside the vehicle. Covered with a sheet is Libbey Eicher, chairman of the Healthy Lifestyles Committee, who portrayed a student who had been killed. Others participating in the event were Life Flight, the Fulton County Sheriff Department, and the Ohio State Highway Patrol.- photo by David Pugh