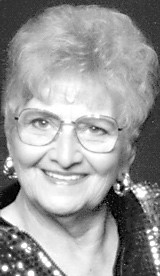 She worked in a flashlight factory during World War II, raised and dressed poultry, and later worked at Beam Stream in maintenance for 20 years.

After retirement, she and her husband spent 14 years wintering in Florida.

Miriam was the best fish filleter around. She always waited for the guys to bring her a mess of fish to clean and fry.

She also decorated wedding cakes for friends and family.

She meticulously made custom baton twirling outfits for a young lady from Montpelier.

She took pride in doing the Christmas decorations and handmade banners for the clubhouse where activities were held when they were in Florida.

Miriam was a member of Wesley United Methodist Church. She was previously a member of St. John Lutheran Church in Montpelier, where she taught Sunday School, was involved in the Ladies Circles, decorated for holidays, and took her Luther League students to other churches so they could see other religions.

Born Jan. 11, 1925, at home in Fulton County, Miriam was the daughter of Adam and Oscea (Gearig) Britsch.

She graduated from Pettisville High School, where she played first chair trumpet in the band and pep band, was valedictorian of her graduating class, and was class secretary and treasurer.

She was preceded in death by her parents and brothers, Herman and Melvin Britsch.

Funeral services were held on Tuesday, Nov. 26, 2019, at Krill Funeral Home, 860 West Mulberry Street, Bryan, at 11 a.m. with Pastor Peter Paige officiating. She was laid to rest with her husband at Pettisville Cemetery.

Memorial contributions may be given to Wesley United Methodist Church, Meals on Wheels, or Community Health Professionals Hospice.