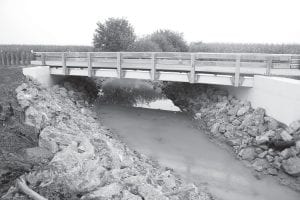 The Co. Rd. 25 bridge, built by Miller Brothers Construction, Archbold, for the Fulton County Engineer Office. The final project cost is estimated to come in about 1% over the original bid of about $305,000. The bridge is about 1,000 feet north of Co. Rd. D in German Township.– photo by David Pugh

The bridge, located about 1,000 feet north of Co. Rd. D, was about a week and a half behind schedule, mostly due to weather delays.

Rowland estimated when final totals are in, the bridge will be about 1% over the $305,255.50 bid submitted by Miller Brothers Construction, Archbold.

Rowland said an overrun of 10% would “raise eyebrows.”

Rowland said four test borings were done several years ago– two on each side of the creek. Computations based on those test borings said steel pilings for the abutment foundations would have to be driven 30 feet into the ground.

The added depth “wasn’t anything out of the ordinary,” Rowland said.

“We drove the piling in July, a week after that three-quarters of an inch rain event. The clay soil was not gripping the pilings,” he said.

Addressing the weather delay, Rowland said at one point the water in the creek was 10 feet deep, making it impossible to work at the site.

Rowland said the bridge that was replaced was a concrete slab structure, built during the 1920s.

The old bridge was only 15 feet wide. Signs limited traffic at the bridge to one lane at a time.

The bridge also had load restrictions.

“It was high on our list to get replaced,” he said.

The new bridge utilizes pre-cast, pre-stressed concrete beams, which are set onto the abutments in one day. The next day, constructions crews can pave over the beams, creating the bridge deck.

It’s a common and cost-effective way to build bridges on county roads, he said.