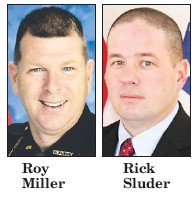 Two men are running to become the Republican candidate for Fulton County Sheriff in the primary election on Tuesday, March 6.

They seek to replace Darrell Merillat, who, after about 27 years in office, is not seeking reelection.

After the primary, the winning GOP sheriff candidate could face either an independent or write-in challeger in a general election.

No Democratic candidatefi led to run in the primary election.

Comments: “I have been dedicated to the Fulton County Sheriff’s office for 21 years. I have served as deputy, investigator, lieutenant, and currently, as chief deputy.”

Other Experience: “My 23 years of service to Fulton County in police, fire and emergency medical service and my proven command experience during major emergencies have helped me develop the leadership abilities necessary for the office of sheriff.

Goals: Develop the Fulton County 911 communications center into a professional model of police, fire, and EMS dispatching; will implement a philosophy of teamwork and cooperation with local police departments that will allow for coordinated efforts in criminal investigations; will improve the morale of the sheriff office employees by investing in training and developing a culture of honesty, integrity, and fairness.

Comments: “As sheriff, my values of faith, family, and community will provide a strong foundation for making the right decisions to protect the heritage of Fulton County.”

What is difficulty? Only a work indicating the degree of strength requisite for ac-complishing particular ob-jects; a mere notice of the necessity for exertion; a mere stimulus to men.–Samuel Warren