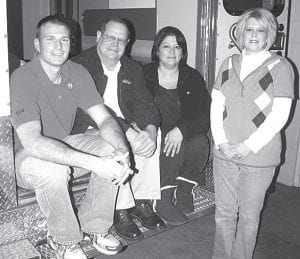 When a genetic disease caused blood clots and Bruce Bly, Archbold Rescue squad to pass through Deb Miller’s heart, it was members; Ada Davis, ALS-1 paramedic; and ALS-1, the Archbold-based paramedic unit, Miller. Brodbeck performed CPR on Miller for and Archbold Rescue that brought her back 20 minutes; when it was over, he said he was to life five times. From left: Kyle Brodbeck drenched in sweat.– photo by David Pugh

Call it divine intervention, fate, karma, or just a happy combination of circumstances. Deb Miller, 46, of Archbold, is alive today when by all rights, she could very well be dead.

After a blood clot in her leg broke loose and went to her heart, her mother, Diane, said Deb died seven times: five in the hands of ALS-1 and the Archbold Rescue Squad, and twice more at Fulton County Health Center.

Rescue squad members performed cardiopulmonary resuscitation on Miller for 20 minutes, keeping blood flowing through her body, supplying vital organs, until the situation could be brought under control.

Ada Davis, a paramedic with the Archbold-based ALS-1, and Kyle Brodbeck and Bruce Bly, of Archbold Rescue, are restricted from talking about the details by government regulation, but Bly said the call went exactly as it was supposed to.

CPR kept Deb alive until she could get to a hospital.

In October 2010, Miller said she started having some pain in her right leg.

She began passing out.

Archbold Rescue took her to the Fulton County Health Center on Sunday, Oct. 24, where a blood clot from her pelvis to her ankle was discovered.

She was placed on bloodthinning drugs and after five days, returned home.

After similar symptoms Sunday, Oct. 31, she was again taken to FCHC, but returned home at 5 am the following day.

On the morning of Tuesday, Nov. 2, Deb and Diane, who had been staying with her daughter, were preparing to visit a vascular surgeon in Toledo. Deb began losing consciousness again, so the appointment was cancelled.

Diane said she helped her daughter get from the bedroom to the bathroom, then to the living room couch.

Diane said Deb began sliding down the couch, “and I saw she’s not coming out of it. She wanted a cold rag. She had never asked for a cold rag before.”

In the past, Deb had been reluctant to have her mother call the ambulance, because she never really felt “sick.”

On that morning, Deb asked for the Rescue.

“When she asked for the Rescue, well, you know,” Diane said.

Diane said she immedi- (Continued from first page) ately called for help, “and it was like God was guiding them. They were there just like that,” snapping her fingers.

“They came in. One did her blood pressure, one was putting the heart monitor things on, and Ada, as soon as she was getting the monitor, said, ‘Oh, I might need the paddles,’” referring the paddles used to defibrillate, or electrically shock, a quivering heart into regular rhythm.

“I knew right there, we were in trouble,” Diane said.

Deb said, “I remember being on the couch, them coming in, and the next time I woke up I was in the emergency room.

“It was like I went to bed for the night, and the next thing, I was waking up in the morning.”

Diane said she was told that during the ambulance trip from her Archbold apartment to FCHC, her daughter died.

“Bruce Bly said it was the weirdest call he was on, because she would die– that’s exactly what he said, ‘she would die, we would bring her back, she’d wake up and talk to us. She would say a few things to us, and bang, she’d be gone again.’”

Deb said when she woke up, “I’m looking at the lights, and I’m thinking, ‘Okay, I’m in the emergency room.’ I was fully aware of what was going on.

She wasn’t the only one who was praying. Diane said she began calling family, and the news spread across the social networking website Facebook. Soon, people all over were praying for Deb’s survival.

Deb was flown from Wauseon to Toledo Hospital by helicopter ambulance.

After several days in the hospital she was released, but she’s been back, admitted other times for further treatment.

Her father, Joe, passed the genetic trait to her. Two of her three sisters and a niece have the disorder, but none have suffered medical problems.

Nor has her father.

“He’s had heart surgeries, back surgeries, he’s had all kinds of stuff. Never had a blood clot,” Diane said.

Deb credits Davis, Brodbeck, and Bly for her survival.

“Those three saved my life. I got home and I hugged and thanked all of them for saving my life, for not giving up on me.”

She said she has reflected on the experience.

“I’ve been given a second chance,” she said.

But she hasn’t made big changes in her life.

“I appreciate things more,” she said.

Diane added, “God wasn’t finished with her here yet.”