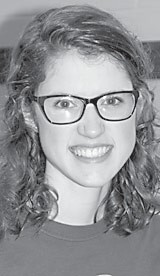 Elizabeth Miller, a senior at Pettisville High School, knew she was named the Franklin B. Walter Scholarship winner for PHS when she attended a recent banquet for Walter Scholars.

But she didn’t know she was the Fulton County winner.

“I didn’t know anything about it until I got there and looked at the program… that’s when I saw (I was)” the county winner, she said.

The awards program honors Franklin B. Walter, who was state superintendent of education for Ohio from 1977-1991.

One student from each high school in the state is named the Walter scholar for that school.

Then, one student from each of Ohio’s 88 counties is recognized as the county winner.

Miller said she decided she “might as well go for it,” and applied for the scholarship.

The county winner gets a $500 scholarship.

“I went into it not expecting to be the (county) winner,” she said. “I didn’t know a lot of details about it, so when I got there, I was really surprised.”

She said she thought, “Wow, why did they pick me?”

Students must be seniors in high school to be eligible.

“Eligible students must demonstrate outstanding academic achievements as indicated by high school test scores and achievement awards, as stipulated by the Franklin B. Walter program,” the NWOESC press release states.

“Students are expected to have been a positive contributor in their high school and community.”

Miller said she had to write an essay about her personal goals and a second essay paying tribute to one of her teachers.

“I wrote mine about Senõr Rich Reid, Spanish teacher,” she said.

Miller said she selected him because of his passion for teaching.

“It’s obvious, and because of that, it makes learning in his class very fun. He’s very creative in what he does, and so every day is different because of that.

“It makes it exciting to come to class. There’s a lot of variety in the class, which is good.”

Miller said academics “comes fairly naturally” to her. She’s not up all hours of the night finishing papers or assignments.

“I try to get them done before that,” she said.

In addition to a heavy academic load, Miller participates in Noteworthy, the school choral group; Fog Delay, the PHS jazz band; and just finished a run as the lead of the PHS musical, “South Pacific.”

She went for a visit and stayed with her sister, Shelby, a 2014 PHS graduate, “and I just had a blast.

“I know there will be schoolwork, but I think one of the things that attracts me to Hesston is they have a really good community feel.

“It’s a small college, and a two-year college. It has kind of a ‘vibe’ to it.

“It just feels so much like home to me.”

She plans to double major in elementary education and English as a Second Language.

“This could change,” she said.

After that, she plans to transfer to finish a four-year degree.

“I’m not sure where yet. I’ve got some options,” she said.

Miller said she really hasn’t had time to talk to her friends about the Walter scholarship, but when she does, “It’s kind of, ‘Wow, what is that?’

“Most people didn’t have any idea of what it was.”

Anna Schoenhals was named the Walter scholar from the Archbold Area School District.