Miller Is Resident Of The Month At Fairlawn 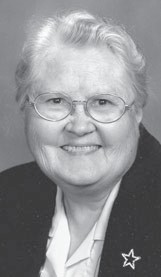 Louetta Miller is the April Resident of the Month at Fairlawn Haven Nursing Home, Archbold.

She was born on Sept. 12, 1924, to Lloyd and Minnie Miller at their home on the family farm on County Road B.

Louetta began attending the Pettisville School in 1930, a year after it opened. Her schooling ended when she was 16, and she soon went to work for her aunt Amanda Frey at Archbold Dry Goods.

Louetta attended the West Clinton Mennonite Church her whole life. At a young age, she took a six-week Bible School course in Canada.

Louetta then held Vacation Bible Schools in Ohio and other states. She was also a Sunday School teacher at her church.

Louetta was always involved in some church activity, whether it was with children or quilting with the ladies.

Her mother died in 1962; later, her father married Ada Miller. Soon after her dad remarried, Louetta moved to a small rental house next to her parents.

In the 1990s, Louetta took classes at Wauseon High School and graduated with a general education degree. Then she took three or four college classes at Four County Vocational School.

Louetta became part owner of the dry goods store, and when her aunt retired, became the sole owner of Archbold Dry Goods.

Louetta read and traveled a lot. In 1993, she took a trip with Lawrence to Europe, visiting cousins in France and touring several other countries.

Even when the store was sold, Louetta continued to do tailoring in the store and at home until she moved to Assisted Living in 2005.

In May of 2010 she became a resident of Fairlawn Haven.