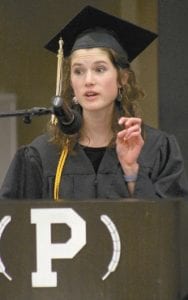 Miller, who was also the winner of the school’s annual Citizenship Award, the highest honor accorded to PHS graduates, said roller coasters are like life, because they have their ups and downs.

“But that’s a little bit too generic for me,” she said.

Instead, she referred to the Cedar Point Top Fuel Dragster, which propels passengers forward at up to 120 miles an hour and straight up 420 feet. She described it as “the craziest 17 seconds of my life.”

But during the two-plushour wait to get on the ride, Miller said there were three delays for problems with the coaster.

The lesson? Even the most powerful coaster had to be helped three different times.

It wasn’t “able to achieve greatness all by itself,” she said– just like the Class of 2016.

The class has been able to achieve so much by coming together and working as a team, from its elementary school play, “Curses, Foiled Again,” to later productions. 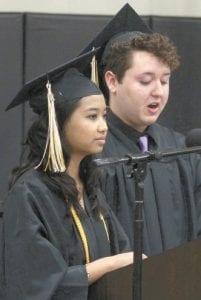 “I think some of our best memories have come from those experiences,” she said.

“Looking back, all of those things we did were slightly embarrassing, but they were successful because we did them together.

“So let someone help you. Allow yourself to be vulnerable sometimes, and accept encouragement from others, because we are better together.”

Another lesson Miller learned from roller coasters is to appreciate the differences in each.

Each is designed with its own individual purpose; just because one is different doesn’t mean it’s bad.

Each has something special about it.

“To me, I learned the most about looking past differences on our Spanish (class) trip to Mexico,” she said.

“Even though people look different and lead different lifestyles, we have a lot in common, and we can make the choice to respect people for who they are and what they have to offer.”

She learned that “different” is not the same as “bad” or “stupid.”

One doesn’t have to go to Mexico to appreciate that lesson. As a small school, with a small senior class, Miller said they had to learn to push past their differences of opinion.

Even though amusement parks make money from giving rides, roller coasters give and give and give. Their sole purpose is to provide joy in people’s lives, she said.

People should live a life of service to others, and that service doesn’t have to be boring.

Miller described the fun members of the class had doing service projects.

She also talked about PHS teachers. Not only had they taught the students their class subject matter, they also shared the life lessons they had learned, and listened to class members when they needed to talk.

“My prayer for the class is that we will continue to have the ability to give of our time and resources and our talents to care for the needs of others rather than ourselves, and that we will have the courage to share hope as we do it,” she said.

Work as a team. Seek to understand differences rather than judge. Care about people in your daily interactions, she said.

“You might just find that’s the most thrilling ride of all,” Miller said.

Amanda Wyman, PHS counselor, said of the class of 40 graduates, 88% are going on to college at either a two-year or four-year school.

She noted that 53% of the class had a grade point average of 3.3 or higher.

Nofziger said that in the past, they had measured their time in school by class periods, or semesters, or years.

But after graduation, he said, they will measure their time at Pettisville in friendships made.

Behind each member of the class, Nofziger said there are dozens of people who helped them through their school years.

“The best way to show gratitude (to those people) is to make the most of the opportunities given to us,” he said.

Tilley said the class is “beyond prepared” for life after Pettisville, thanks to the caring faculty, challenging academic curriculum, and positive student body.

Each graduate will make a difference in the world, and should they falter, Tilley said they can be confident their will be people right behind them to help pick them up.

The pair concluded by saying, “We love Pettisville, we really do.”