Miller Cans 22 For AHS In NWOAL Win Over Delta 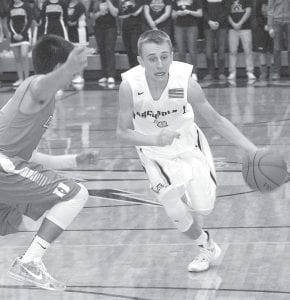 Eli Miller brings the ball down the court for the Blue Streaks.– photo by Scott Schultz

The Streaks used a strong second half to win 71-56, remaining perfect in the NWOAL at 5-0.

The Panthers had upset in their eyes throughout the first half, leading 14-12 after the first eight minutes.

The Panthers settled the AHS faithful with a pair of foul shots from Evan Vasquez, a deuce from Noah Parsons, and a three-pointer from Vasquez.

Wooley drove the lane for two and Welch made good for one at the charity stripe and the Streaks trailed 21-18.

Parsons hit a ten-footer and Bowen Green added a put-back, pushing the difference to 25-18.

Toby Walker, who finished with nine points off the bench, scored Archbold’s final points of the first half.

The third quarter was all Archbold.

Michael Weigand hit a jumper to start the period. Delta answered with a conventional three, but the quarter belonged to AHS as Eli Miller led the charge in the second half, canning 16 of his game-high 22 points.

Miller wasn’t the only Streak to light up the scoreboard as Welch, Weigand and Bryce Williams each finished with 10 points.

“We have been waiting for that Eli to show up,” said Doug Krauss, AHS head coach.

“It’s just confidence with him. He gets a couple to fall, and that helps him.

“Eli can shoot the ball, and hopefully this was a breakout night for him.”

The Streaks picked up the pace in the third and never looked back, scoring 30 points to Delta’s 16 for a 52-41 lead to start the final period.

Archbold outscored the Panthers 19-15 in the final eight minutes to seal their 10th win of the season.

“It was Senior Night tonight, and those kids– Mike Weigand, Derek Walker and Benny Gomez– have been great. All three are quality young men,” said Krauss.

“This was a good challenge for us,” said Krauss. “Delta can shoot the basketball, and in the first half they didn’t do anything we didn’t expect.”

Archbold traveled to Defiance, Saturday, Jan. 30, to face the 15-3 defending Division II state champions, who are ranked fifth in D-II by the Associated Press.

Behind 21 points from Shay Smiddy, the Bulldogs connected on 10-12 at the charity stripe in the closing minutes of the game to seal the 59-53 win.

Defiance outscored Archbold 15-10 in the third.

Archbold returned the favor in the fourth but came up short, scoring 22 points to 21 for DHS.